"I wish this story were different. I wish it were more civilized. I wish it showed me in a better light, if not happier, then at least more active, less hesitant, less distracted by trivia. I wish it had more shape. I wish it were about love, or about sudden realizations important to one's life, or even about sunsets, birds, rainstorms, or snow." ~margaret atwood

Margaret Atwood is my favorite author. I actually have a whole bookshelf of her books; I collect them. She's written a LOT of books. Recently I lent some to teachers at my school; I'm getting them hooked. Right now people are borrowing Oryx and Crake, The Blind Assassin, and The Penelopiad (three of my favorites). I am slowly spreading the genius that is Margaret Atwood. I go back and reread them from time to time. Right now I'm rereading The Handmaid's Tale, one of my favorites. It's so freakin' good.

My mom and I don't always get along, but there are times when I'm overwhelmed by how much she cares. Tonight was one of those times. She really, really tries, and it means a lot.
Posted by Claire at 9:15 PM 1 comment:

"Somethin' filled up my heart with nothin', someone told me not to cry.
But now that I'm older, my heart's colder, and I can see that it's a lie." ~the arcade fire

GAH!!!
This trailer could not be more perfect. I'm not sure the movie can live up to it. That gorgeous version of Arcade Fire's "Wake Up" playing in the background? Absolutely brilliant.

Posted by Claire at 5:53 PM No comments:

"Sleep my little babby-oh, sleep until you waken. When you wake you'll see the world if I'm not mistaken. Kiss a lover, dance a measure, find your name and buried treasure. Face your life, it's pain, it's pleasure, leave no path untaken." ~neil gaiman 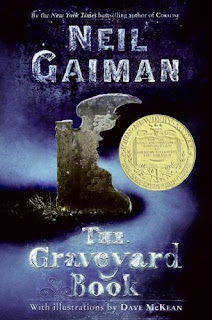 There is so much that I could write about right now, but for some reason I only feel like mentioning a book I read recently with which I fell in love. I read it a few weeks ago. It's The Graveyard Book, by Neil Gaiman. You're probably familiar with his young adult novel Coraline, which was recently made into a movie. I think I enjoyed The Graveyard Book even more than I enjoyed Coraline (and I loved Coraline when I first read it years ago). The Graveyard Book recently won the prestigious 2008 Newbery Medal, and deservedly so. It is brilliant. It is scary and touching and heartbreaking and clever and Gaiman is just a master storyteller. It's about a boy who is raised by ghosts in a graveyard, but it's about so much more than that. It's about growing up. Go read the reviews on Amazon, because they're much better written than my hurriedly composed plug for the novel. And read the novel. It is not just a kids' book (in fact, I think it would be scary for kids; I was reading it on the subway and at one point I gasped in fear so loudly that I was embarrassed). I cannot say enough good things about it.

My life is so busy right now and it's frustrating. Hopefully it will calm down soon.
Tomorrow I'm taking my kids to the Museum of Natural History. Field trips are not easy for teachers. I'm dreading it.
Posted by Claire at 8:20 PM 1 comment:

"When you're alone and life is making you lonely, you can always go downtown. When you got worries, all the noise and the hurry seems to help, I know, downtown. Just listen to the music of the traffic in the city, linger on the sidewalks where the neon signs are pretty, how can you lose? The lights are much brighter there, you can forget all your troubles, forget all your cares, and go downtown. Things'll be great when you're downtown. No finer place for sure, downtown. Everything's waiting for you." ~tony hatch

I've been incredibly busy lately, but it's mostly been good busy. I saw three shows in two days. On Friday night I saw ROOMS a rock romance. It's an off-Broadway musical, and I really enjoyed it. I found it predictable, but it has a great score and fabulous acting.

On Saturday afternoon I saw Exit the King. This is a huge season for Broadway plays, but this is my absolute favorite so far. It is brilliant. First of all, I did student rush and ended up front row dead center. It was a perfect view, and I made eye contact with the actors multiple times. In fact, Geoffrey Rush almost touched my face when he was lying onstage and reaching out towards the audience to grab imaginary flowers. If Geoffrey Rush does not win the best actor Tony this year, there is something wrong with the world. He was brilliant. He gave one of the best stage performances I've ever seen, and I've seen a lot.

I saw Blithe Spirit on Saturday evening. Nicole gave me a pair of comps so I took Christin, and we had great seats (orchestra row C). It was a strong production and I'm sure it'll get rave reviews when it opens tonight, but I wasn't crazy about the actual play. I did, however, enjoy seeing Angela Lansbury, Rupert Everett, Christine Ebersole, and Jayne Atkinson all on the same stage.

Okay, pictures. These made me really happy. They were all so nice. Susan Sarandon told me that it's her daughter's birthday today so they're going to celebrate, but she still stuck around and was very nice. Geoffrey Rush was also very kind. He's a funny guy. And although he's an Oscar winner, he was perfectly willing to put up with people talking to him about his role in Pirates of the Caribbean. Is it bad, though, that the third picture is my favorite? I'm a huge fan of Six Feet Under. She was soft-spoken but kind, and I was so glad that I got to meet her (I've seen her in three plays before but have never stage-doored). 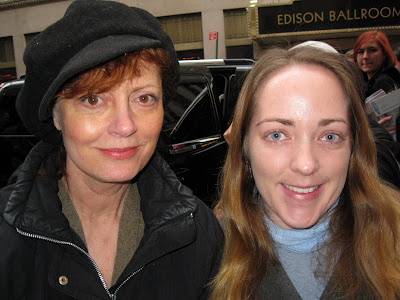 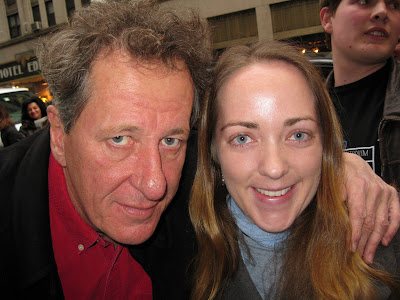 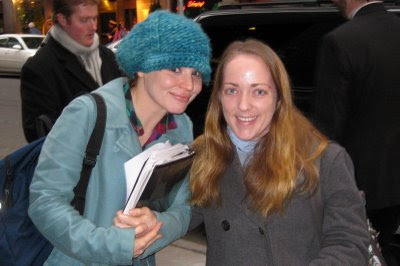 "Women of the future hold the big revelations." ~u2

I almost forgot about posting "Get on Your Boots!" I love Bono's dancing. :D


Tonight is "Get On Your Boots."

"The right to be ridiculous is something I hold dear." ~u2

Night 3: My favorite song from the new album, "I'll Go Crazy if I Don't Go Crazy Tonight." I've had it memorized for awhile, can't stop listening. I love the fact that it is pure, unabashed, pop. It's just so fun and catchy. I think Bono said it's this album's "Beautiful Day."


Random piece of news: Ice-T came to my school today. Hehe. Some of my kids went crazy. They liked listening to him speak. I wish they would listen to me.
Posted by Claire at 4:16 PM No comments:

This is U2 week. Just so you know.

The opening line is from "Unknown Caller" on U2's new album, which I've been listening to nonstop for the past couple of weeks. My thoughts on "Unknown Caller:" the first time I heard it, my immediate reaction was that the melody reminded me of "The Hands that Built America." The chorus makes me think of "Numb." The theme of "Unknown Caller" seems to fit with Zooropa/ZooTV, which I absolutely love (yes, I'm one of the few who ADORED Zooropa). I like it.

I'm just going to share these all week. Here's last night's U2 Letterman performance. I didn't like it as much as Monday's (I'm not as crazy about "Magnificent" as I am about "Breathe"), but still, they're amazing.

On tonight's show they're playing my FAVORITE song from the album, IGCIIDGCT (even typing out the acronym takes a long time!). Watch it. It will be fabulous, I guarantee you. Or tune in here tomorrow for a video.
Posted by Claire at 8:02 PM No comments:

"I don't want to talk about wars between nations." ~u2

I'm on Twitter now (not sure how much I'll use it, we'll see).
http://twitter.com/Clairvoyant94

U2 is on Letterman all week. Yesterday I called the standby ticket line in the morning and miraculously got through. When I got there in the afternoon I made it through the first cut. We stood outside for about an hour. I was #15 (out of 40-something). They only let in seven standbys. I was so bummed. It was snowing, it was freezing, we stood outside for an hour, and didn't get in. And then, to rub salt in the wound, they ended up playing a knockout version of "Breathe." My second favorite song on the album (right behind "I'll Go Crazy if I Don't Go Crazy Tonight," which I have listened to about 100 times and cannot get out of my head). Arg! I know I'm lucky to have seen them live in concert three times already, and I will see them on this tour and will see them play "Breathe," but still. It would have been cool to be at that taping. I'm going to try again on Thursday.

Another highlight of the show (besides the performance): the boys shoveling snow outside the studio. It was hilarious. Edge is the only one really working. Bono is dumping snow towards Adam, who tries to dump it back towards Bono. And best of all is Larry, who is standing still and smoking a cigarette. Oh, Larry.

Go buy No Line on the Horizon. It is on sale today and it is brilliant. Seriously.

Posted by Claire at 6:43 PM No comments: