"Words would land on me, then abandon me, mangle, untangle me, leave me on the floor." ~u2

I love reading. I always have, always will. I meant to make a post sharing my favorite novels of 2012 a long time ago and never got around to it, but better late than never, right? So here goes. Obviously I've read a limited number of books published last year, and I'm sure I missed out on some great ones, so send me recommendations of what you read and loved in 2012. I already have a list going (starting with Bring Up the Bodies, winner of the Man Booker Prize). This is not a "Best of" list, this is just what I personally enjoyed most out of what I read.

My Favorite Novels Published in 2012
1.  Arcadia - Lauren Groff
This book is absolutely beautiful. Lauren Groff is such a talented writer that the beauty of her prose sometimes makes me want to cry. I would never actually abandon my current life to go live on a commune, but I have to admit I've idly wondered what it would be like and recognize the appeal of that lifestyle centered around community and living off the land. Groff portrays the idealism of the inhabitants of Arcadia (a commune) as well as their inevitable failure to live up to their ideals. This novel is about a boy, Bit, who grows up on a commune, and it follows his journey into adulthood. It's heartbreaking and lyrical and imaginative and you should read it.

2. Beautiful Ruins - Jess Walter
I almost want to say it's a tie for first. These two books have such different tones, yet they're both examples of such gorgeous writing. If I had to choose one I'd go with Arcadia, but I still think Beautiful Ruins is magnificent. It's just so enjoyable, and it's wonderfully written. It features romance, comedy, and drama masterfully tied together in a plot that spans decades and continents. It's perfectly crafted and you won't be able to put it down. It's hard to summarize the plot, but it begins by introducing a young innkeeper in a small Italian village in 1962 and the movie star who comes to stay in his hotel. It also takes place in present day Los Angeles, and the novel seamlessly transitions between the two settings. Trust me, you will love this book.

3. Canada - Richard Ford
This book will break your heart, and it's another example of exquisite prose. It's a quiet novel, but it's incredibly powerful; it's force will sneak up on you. It tells the story of Del, a boy whose life is turned upside down when his parents rob a bank. Del tells the story as an adult, looking back on his life and reflecting, and that technique allows the reader to see how his understanding of events has changed over the course of time. Ford paints such a clear picture of the setting and the characters; I felt like I was a part of Del's world, and it was an unsettling feeling.

4. The Age of Miracles - Karen Thompson Walker
This book establishes such a distinct voice, and I love that. The narrator is a ten year old girl named Julia who is witnessing a global slowing that seems to be leading to the end of the world. It's about maintaining hope and growing up in a world that is slowly falling apart. It's very moving (I read it awhile ago, but I think I remember crying a lot). It's simultaneously harrowing and lovely and it's definitely worth reading.

5. Gone Girl - Gillian Flynn
You've probably already read this book because it's insanely popular, but if you haven't you should. You will not be able to put it down. It's a thriller that leaves you guessing through the last page. It's clever and stunning and it will hit you hard. It stirs up a whole mess of emotions, which I think is a good thing. This is not just your average thriller, so even if you're not generally a fan of suspense novels, you should read this one.

I told myself I'd limit myself to five, but I feel like I have to mention a few more. So it's my Top 8 list.

6. Dare Me - Megan Abbott
This one is very different from the rest on the list. It's an absolutely terrifying glimpse at the lives of high school girls, and it's crazy-good. Seriously. It's an example of masterful storytelling that will take your breath away. It's suspenseful and you won't be able to put it down, and it's well-written.

7. Reached - Ally Condie (third novel in the Matched trilogy)
I love, love, love this young adult trilogy. I read a lot of YAlit, and I'm not ashamed of it; I think there are some fabulous writers currently writing for young adult audiences whose literature transcends age distinctions, and Ally Condie is one of those writers. This series is about so much more than a love triangle. It's about the importance of art, creativity and choice. The characters and the dystopian world that Condie has created are very well defined, and it was hard for me to say goodbye to them. Reaching the end of a captivating trilogy is a sad, sad thing. This was a satisfying conclusion, though.

8. Laura Lamont's Life in Pictures - Emma Straub
This is a detailed portrait of a woman's life. It's a wonderful debut for Straub, and I can't wait to see what she does next.

On a completely unrelated note, the Oscars are on Sunday! Of course I'm super excited.

On another completely related note, last night's Parks and Rec made me so freakin' happy.

Posted by Claire at 5:47 PM No comments:

"It's empty in the valley of your heart. The sun, it rises slowly as you walk away from all the fears and all the faults you've left behind." ~mumford and sons 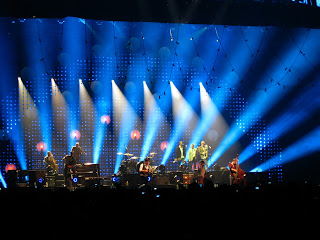 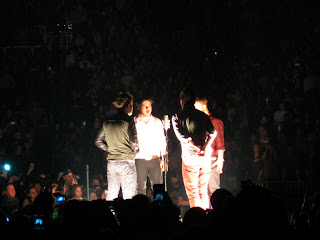 Look at this setlist. I got so incredibly lucky, because this is everything I hoped to hear (and the night before in Boston, they didn't play songs I wanted to hear, like "Lovers' Eyes," so I was at the perfect show).
We had a perfect view (we were in the front row of the seated section so there were no obstructions), and I loved the band's energy.

The only annoying thing was the noisy crowd; why do people spend a bunch of money on concert tickets and then talk throughout the whole thing? That annoys me to no end.

For the first encore, the band came out and played on a platform right behind the soundboard, which was directly across from where we were sitting, which was awesome. I filmed it:

Here's my recording (if you want to download it, here's a link):


The Felice Brothers were great. Unfortunately the crowd was especially noisy during their set. Here's my recording (I couldn't help but sing during Fire at the Pageant and Frankie's Gun!).(Downolad link)