So I went to a taping of Late Night with Jimmy Fallon on Thursday and was on the Band Bench for The National's performance, which was fabulous. I'm here to share video. I'm not as visible as I was last time:

but you can definitely see me! Here's some help: 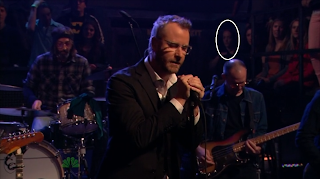 Here's a link to the whole show (it's worth watching for a few reasons, one being Susan Sarandon's crazy, miniature killer dogs taking over the studio, another being Anthony Mackie being awesome and breaking into song).

Sea of Love (This is the first time they've played this song, and I need to listen to it a few times to really get a handle on it, but I think I love it. It's very different from the band's usual sound.):

I Need My Girl (I love this song. It's on the new album but they've been playing it live for awhile, so I've heard it in concert a few times and have recordings of it. This version is a bit different, and it's even better than the earlier version they played.):

I cannot wait for this album to come out.

I was lucky enough to see Mistaken for Strangers at the Tribeca Film Festival on Friday, and it was absolutely amazing. It was the Opening Night film of the festival. I wanted to see it because of course I'm obsessed with The National, but you don't have to be a fan of the band to enjoy the movie. It's a film by Tom Berninger, the brother of Matt Berninger (lead singer of The National). Tom went on the road with the band and filmed the experience. It features some great footage of the band, but above all it is a movie about brothers. It's surprisingly hilarious and also very touching at times. I hope it gets a wide release eventually, because it's definitely worth seeing (scroll down to my last post to see the trailer). There was a Q&A session after the film with Tom Berninger, Matt Berninger, Carin Besser (Matt's wife, who was very involved in the making of the film), and Craig Charland (the film's fourth producer, who also worked on Win Win, one of my favorite movies). It was interesting to hear them speak about the film. 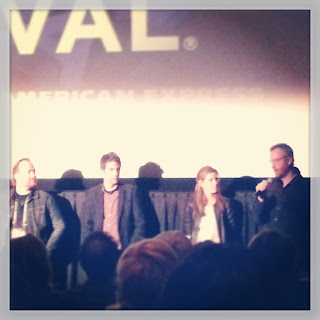 I'll be back soon with some more amazing LNJF video (unrelated to The National).
Posted by Claire at 8:53 PM No comments:

ETA: If you're reading this Thursday night (4/25), tune in to Late Night with Jimmy Fallon. The National is back on the show, and I'm back on the Band Bench! The video below (just click the link) shows my first appearance with The National.


Just because I'm in the mood, here's one of my favorite moments, and the best talk show I've ever been to (look for me wearing a light blue shirt, gray sweater, directly over Matt's shoulder during most of the video):


ETA: If the video doesn't work, try this link (I'm having trouble with embedding, have been playing with html code for what feels like forever and I'm sick if it).

Mistaken for Strangers was the opening night film at the Tribeca Film Festival, and I'm going to try for a rush ticket to see it this weekend, so wish me luck. It looks awesome, and I've heard great things about it.

Have you ever felt nostalgic about a time or place you've never physically experienced? Reading Moon Over Manifest by Clare Vanderpool makes me conjure up an image (no, more than an image: a feeling) of myself sitting in a rocking chair on an old Southern porch, sipping lemonade and eating pecan pie, basking in the summer heat that wraps around me like a blanket. I can picture my surroundings perfectly, although it's not an exact place or time I've been to. I love, love, love the setting of a sleepy Southern town. I can't say why, but it's always fascinated me. I love reading books that take place in the South (Gone with the Wind is a particular favorite). I've got Southern blood (according to my family tree I've had family there since before the Revolutionary War), and I was born in the South (South Carolina), so it's a setting that's in my bones. I'm drawn to the region's past more than it's present. Moon Over Manifest is the perfect book for me. It takes place in the 1930's in the small town of Manifest, Kansas, which seems more Midwestern than Southern when you look at a U.S. map, but the town feels Southern. The novel won the 2011 Newbery Award, and I already love the protagonist, a brave, adventurous girl named Abilene Tucker who has always been a wanderer and wants to develop a deeper connection to her father, who has sent her to Manifest while he works on the railroad. I love YA Lit. There are so many good books aimed at young people that can be enjoyed by a much wider audience. Speaking of good YA Lit, go read John Green's The Fault in Our Stars. I cried a lot, just as I expected, but it was so, so good. I love that this novel has been included in most of the general "Best of 2012" lists; usually you don't find YA Lit on those lists. Time Magazine named it the Best Fiction Book of 2012, and it's awesome that that honor went to a YA book. Hopefully it will help inspire people to broaden their horizons and begin to cross genre lines when choosing books.
Posted by Claire at 7:19 PM No comments: 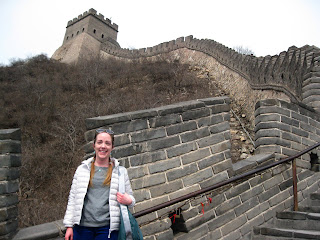 Oh my goodness, I have so much to write about and no time. I haven't written about China! It was absolutely fabulous. I cannot say enough good things about the trip. I am so, so glad I went. I was with a really cool group of people, and we saw some amazing sights. It was so strange to come home and not be surrounded by the people with whom I had spent the previous eleven days, to not gather around the table with them and share food and stories and to not constantly look around me while walking to make sure they were nearby. I was astounded by so much of what I saw. I think the highlight for me was the Great Wall. It was much more of a climb than any of us anticipated, but I managed it fine (I'm used to hiking). I reached the tower and the view just filled me with awe. The Terra Cotta Warriors were another favorite site. Pictures don't do it justice. You walk into the largest pit and can't help but be overwhelmed by the massive army of lifelike, unique soldiers. It's mind boggling to think of the work that went into the creation of the thousands and thousands of figures. I'm so glad I was able to see the site in person. We saw cities (like Shanghai, Beijing, Xi'an, and Suzhou) and the countryside, and there is such a marked difference between the areas we saw. It was such a learning experience to be able to travel around some of the country and see the way different people live in different places. We encountered beautiful scenery and beautiful artifacts. I am so grateful I was able to take this trip; it was a once-in-a-lifetime experience. It was a whirlwind tour (five flights in eleven days, not a lot of time to rest and no time to recover upon returning home), but I can't express how wonderful it was. I have LOTS of photos here, or here's a slideshow:

On to another random topic, here's one of the reasons I love Nashville (the TV show). My favorite thing about the show is Connie Britton (duh), but how amazing are these girls?

Vanya and Sonia and Masha and Spike
I was happy to get a seat front row center for this. It's got a great cast, featuring Sigourney Weaver, David Hyde Pierce, and Kristine Nielsen, three very talented actors who play siblings all named after Chekhov characters. Mr. Hyde Pierce (Vanya) has a hilarious, sharp, and intense monologue in act two raging against today's youth that showcases his talent, and he is very, very funny in this play. Surprisingly, Ms. Weaver (Masha), playing an aging movie star, is the weakest link. Ms. Neilsen (Sonia) steals the show. She does a spot-on impression of Maggie Smith, and she's so versatile; she can make you split your sides laughing one minute and make you want to cry the next. Shalita Grant is absolutely hilarious as the siblings' housekeeper, Billy Magnussen is ridiculous (in a good way) as Spike, Masha's much younger boyfriend, and Genevieve Angelson is lovely as a young neighbor. Christopher Durang's play provided for a fun afternoon escape.

The Assembled Parties
I enjoyed this show very much, largely because of the performances of its two leading ladies, Judith Light and Jessica Hecht. I adore Jessica Hecht. She's so strong in every play I've seen her in. I guess non-theatre audiences might remember her best as Susan on Friends or as one of the other many supporting characters she's played in TV shows and movies, but I think she's really established herself as a talented stage actress. In this play, her character is vulnerable, optimistic, and very witty. Judith Light also gives a wonderful performance. Her monologue in act two is the highlight of the show; it brought tears to my eyes. To me, the bond between these two sisters-in-law is the heart of the show. There are some confusing plot points that need to be clarified (I'm not the only one confused; there's a thread on BWW full of people asking questions and speculating about certain characters' fates). There is a twenty-year gap between the two acts (act one takes place on Christmas in 1980 and act two takes place on Christmas twenty years later), and it's not clear what happened to many of the characters who didn't live to appear in act two. Overall, despite the need to tighten the plot, I enjoyed the show.

The Testament of Mary
I'm sorry to say I didn't enjoy this one. It's a one-woman show (those are popular this season) featuring Fiona Shaw, who's a well-established, very talented stage actress (and I liked her as Marnie on True Blood). I guess it didn't help that I saw this show while I was still suffering from jet lag after my China trip. I didn't have high expectations going into it, but I was still disappointed. I couldn't keep my eyes open and kept nodding off, and I never fall asleep during shows. I just couldn't stay awake. The show is based on a book of the same title, and it's told from the point of view of Jesus' mother. Fiona Shaw is definitely a great performer and is completely committing herself to this role, but I really only felt for her character at the end when she delivered her last lines. For most of the play I felt like she was just yelling at the audience, and I couldn't connect with her. I didn't get the purpose of a lot of the set pieces. It wasn't a great night at the theatre.
Posted by Claire at 8:59 PM No comments: