A willow deeply scarred, somebody's broken heart and a washed-out dream. They follow the pattern of the wind, ya' see, cause they got no place to be. That's why I'm starting with me..." ~michael jackson

I'm in shock about Michael Jackson's death; it was just so sudden and unexpected. He made such an important contribution to American pop music and will be missed. I swam a synchro routine to his music one year; it was such a fun routine, one of those routines that you don't mind practicing hundreds of times because listening to that music over and over was so enjoyable.

Tomorrow is the last day of school. This has been the longest week ever. Kids always love the last week of school, but it's unimaginably awful for teachers. Especially with my kids.

Last night I went to the movie premiere of My Sister's Keeper. I ran into Abigail Breslin in the bathroom for the second time (the first time was at Shea Stadium last summer). Seriously, I don't know why, but I have a habit of encountering celebrities in the bathroom (Frances McDormand, Ashley Olsen, Abigail Breslin twice...). I saw Abigail Breslin, Cameron Diaz, Jason Patric, Sofia Vassilieva, and more.

As for the movie...I was bitter going into it because I knew they changed the ending from the book. If you haven't read the book, you'll probably love the movie. I, however, have read the book (and enjoyed it very much). The first 3/4 of the film was great, but I couldn't get over the fact that they changed the ending (in the way that I expected they would). It completely changed the whole point of the story. I love this quote from the Boston Globe review:

"This book hasn’t been adapted, it’s been taken outside and shot."

Anyway, it was still a nice evening out. I love movie premieres. Free popcorn, soda, and star-sightings are pretty cool. And I was impressed with all of the performances in the film. Cameron Diaz handled her serious, drama-heavy role very well, Abigail Breslin was wonderful as usual, and Sofia Vassilieva was a very pleasant surprise (I wasn't familiar with her work going into it).

Posted by Claire at 8:16 PM No comments:

This morning my friends Christin, Caroline, and I went to this Circle Line Carnival Celebration to celebrate their two new boats. Of course it was raining. Of course. It feels like it hasn't stopped raining in NYC for weeks. We went anyway. We rode on the Merry-Go-Round and ate yummy food (burgers, hot dogs, cotton candy, popcorn), and we also went on the first ride of one of the new boats (Circle Line Queens). It was a lot of fun, despite the rain. Check out some pictures (and note how the Statue of Liberty seems to be protruding from Christin's head in every single one). 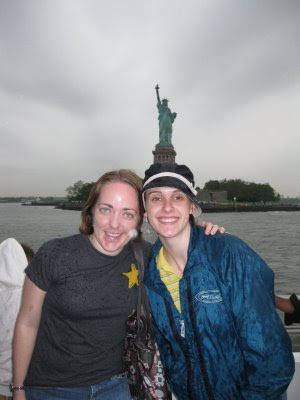 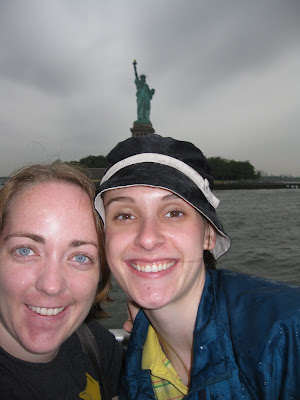 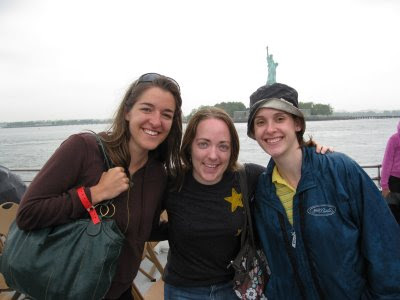 I've been having fun lately. I saw Twelfth Night again. Did I already post about that? I forget. Anyway, it's such a fun play. I also saw August: Osage County last night for a last time before it closes next week. Nic and I wanted to see Phylicia Rashad in it. She was wonderful. I actually think Amy Morton deserved the Tony that year for her performance, and I was glad she returned to the role so I could see her again in it (even though I'm sure she's disappointed that it's closing right after she came back).

Tonight I'm going to this celebration of John Lennon's music at the National Dance Institute. I'm mostly going because Cloris Leachman will be there, and that intrigues me. I'm ready to see her bust a move. And I got free tickets.

Last night's highlight: seeing The Indigo Girls and Matt Nathanson for free thanks to a very kind stranger! I always go to the concerts at Summerstage and sit outside the venue to listen. The sound quality is absolutely perfect; you can hear everything inside the venue. There are always tons of people sitting outside, and best of all, you don't have to pay! I love it. So last night I went to hear Matt Nathanson and the Indigo Girls. I was sitting outside, and five minutes into Matt Nathanson's set, a random guy came up to me and offered me a ticket that he couldn't use. It was so incredibly generous of him, and I was thrilled! Everyone else inside the venue paid $50, and I got in for free thanks to the generosity of a stranger. It made me really happy.

The concert was wonderful. I was mostly excited about Matt Nathanson; I really enjoy his music (particulary his album Some Mad Hope). A highlight was his sing-along cover of Journey's Don't Stop Believing. You can't help but smile when you're singing along to one of the greatest pop songs of all time with thousands of people, led by Matt Nathanson.

I know the Indigo Girls' biggest hits, but I'm not overly familiar with all their songs, and I was pleasantly surprised. They played the ones that I knew (Closer to Fine, Galileo) as well as some new ones that I liked. I think the crowd made it particularly enjoyable; there was a great energy in the air. They closed their main set with Closer to Fine (the song that everyone knows), and it was fabulous. Matt Nathanson came onstage and sang with them, which I loved. They also played Dire Straits' Romeo and Juliet, which is one of my favorite songs. And they closed with Galileo, another good one. It was a beautiful evening and was so relaxing and fun.

After hearing Romeo and Juliet last night, I came home and listened to all the versions of the song that I have. Anyone care to vote in the comments section on their favorite? (I'm also throwing Matt Nathanson's cover of Don't Stop Believing into this playlist just for fun.)

Get Your Own Player!


And Closer to Fine last night:

Gosh, it is way too hard to update this with all the cool stuff I've been doing recently. So I'll have to limit myself to the highlights.

1. I won tickets to see Doves at Terminal 5. I was excited. I've liked them for the past eight years but have never seen them live before. It was a great concert. I got a spot dead center in the front row, so I had a perfect view. I absolutely love that venue; it's so nice and intimate. They played my favorite songs of theirs (10:03, Caught by the River, There Goes the Fear, the Last Broadcast, Here it Comes). They're a great live band.

See if you can spot me in thetripwire's coverage of the concert (I'll help you: second-to-last photo, bottom right corner). You can also see how cool the venue is in that photo.

Here's a video I took of Caught By the River (bad audio quality and somewhat spoiled by the idiot yelling behind me):


And finally, a video of There Goes the Fear (great song, great audio quality, so definitely watch this one):


2. I went to see Brian Stokes Mitchell ("the premier male star of the Broadway stage over the last two decades") in a free concert, and he was amazing. I looove him. He sang Some Enchanted Evening (South Pacific), Stars (Les Mis), Where is This Life That Late I Led? (Kiss Me, Kate), This Nearly Was Mine (South Pacific), I Was Here (The Glorious Ones), It's Not Easy Being Green, What a Wonderful World, The Impossible Dream (Man of La Mancha), Wheels of a Dream (Ragtime), and more that I can't remember at the moment. Most of the songs were Broadway classics. Here's my video of Stars (one of my favorite musical theater songs):


3. Twelfth Night at Shakespeare in the Park! Nicole won tickets in the virtual line for the very first performance, which was Wednesday (I was soooo glad we didn't have to get up this morning and get in line before 6:00am like we had planned to do). Luckily it was a nice evening for it. I absolutely loved it. They gathered together the most talented ensemble cast possible (14 total Tony nominations among them, 5 Tony wins, an Oscar nom...it's ridiculous). As the relative theatre novice, Anne Hathaway was very good. The play was just so entertaining and fun. It's perfect for Shakespeare in the Park. I especially loved the music. With Raul Esparza, Audra McDonald, David Pittu, and Anne Hathaway in the cast, who all can sing very well, the music had to be good.

4. I should comment on the Tonys but I don't have time right now to go into much detail. So here are my highlights: the awards were pretty predictable. BroadwaySpace had a Tony poll (where you had to predict the winners) and I won second place, so I won the cast recordings of the nominated musicals. I was happy about that. I was so glad that Next to Normal won best score; that was an upset, even though I predicted it. Of course everyone knew Alice Ripley would win best actress in a musical, but I still let out a sigh of relief when she did win. I love her. Her performance in Next to Normal is one of the best, if not the best, stage performances I have ever seen. I thought Marcia Gay Harden's acceptance speech was incredibly classy and she was deserving of her award (she was hilarious in God of Carnage). Geoffrey Rush was another performer I was happy for, although everyone knew he would win. His performance in Exit the King is also on my all-time favorite performances list. I won't even go into the awfulness of the Tony Awards telecast, though. The sound problems were ridiculous and the performances weren't great (partly because of the sound problems, but not solely because of that). Anyway, it was still an entertaining evening. One fun thing was going to the red carpet and watching the stars arrive; I was glad I got to do that and was glad that I got the perfect spot from which to observe and take pictures.

That's all for now. Tomorrow I'm going to the closing performance of Guys and Dolls, so I'll (eventually) report back on that.

Only two more weeks of school! I hope I survive.
Posted by Claire at 7:53 PM 1 comment: