"You get mistaken for strangers by your own friends when you pass them at night under the silvery, silvery Citibank lights, arm in arm in arm and eyes and eyes glazing under. Oh, you wouldn't want an angel watching over. Surprise, surprise, they wouldn't want to watch another un-innocent, elegant fall into the un-magnificent lives of adults." ~the national 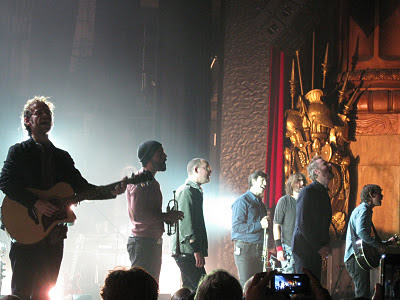 Oh my freakin' goodness. I'm on such a high right now from a week of absolutely brilliant music.
It's been a crazy week. Five concerts in six days (while having to work during the days and get up super early for work) is exhausting. The experience was completely worth the exhaustion, though. I would do this every week if I could; it was one of the best weeks ever. Like I said before, I'm obsessed with The National, so a full week of them was heavenly. They usually don't vary their setlists all that much, but this week they did, and I couldn't have been happier with what they played. Each night I heard at least one new song that I hadn't heard them play live before but was one that I had always wanted to hear. Honestly, I never in a million years could have imagined hearing so many of my favorite songs played live in one single week. It's really unbelievable to me.

Saturday's setlist was seriously amazing. They played so many rarities that I was in constant disbelief and giddiness. It was their last show (out of six in a row) at the Beacon, it was the last show of their High Violet tour (which has been going on for more than a year and a half), and it was streamed live. All those factors meant it would be special, but I didn't realize just how special it would be. There were also some great special guests. Richard Reed Parry of Arcade Fire played with them on a few songs. There were a lot of other great musicians onstage at various points (Annie Clark of St. Vincent, Sharon Von Etten) but my mind is too tired to think of more of them now. I saw Will Arnett, John Krasinski, and Emily Blunt in the audience (they walked right past me).

I recorded all the shows I attended, so a few highlights (for me) are interspersed throughout the rest of this post. Download links for all the shows (full versions) are posted at the end.
I'm trying a new file hosting site, so let me know if these songs actually play. Some of the songs from Saturday are from the live stream, so the quality is better than my audience recording.

"Lucky You" is tied for my favorite song of theirs, and I had never heard it in concert before. I didn't want to let myself hope to hear it this week. They played it on Monday, though (the first night, so I didn't have to keep waiting for it!). I can't tell you how excited I was. I liked hearing them talk about it, too. An audience member kept yelling "Sexy" at Matt, and then Aaron said that the song they were about to play was a sexy song. Matt disagreed and said it was probably one of their least sexy songs, and he suggested that Aaron learn the lyrics. Matt's right. "Lucky You" is not sexy. It's totally creepy; it's basically about a stalker. But the melody is so beautiful that if you don't listen to the lyrics, you might be deceived. Anyway, it's one my absolute favorites. And they played it. And it was even more beautiful than the album version because of the horn section onstage. It was a few minutes of heaven.


On Tuesday "the song" was "Wasp Nest." Oh my freakin' goodness, I love "Wasp Nest." Again, I couldn't believe I was hearing them play it live.


On Thursday I was thrilled to hear "Driver, Surprise Me." That's another gorgeous song. It's one that took a while to grow on me but that really grabbed a hold of me once I listened to it enough times and let it sink in (I love that kind of song).


And now we get to Saturday. Oh, Saturday. I'd like to post at least half the set here because everything was so wonderful. But I'll stick to the rarities.

"SANTA CLARA." Yeah. "Santa Clara." I couldn't believe it. I LOVE this song. It wasn't even released on an album, so it's rare. They don't play it much. By Saturday I had heard so many songs that I was hoping for that I told myself if I heard "Santa Clara" the week would be complete. And when they launched into it, my heart leaped.

"90 Mile Water Wall!" Gahhh! Another rarity that is beautiful but doesn't get played all that often.


I've heard them play "Karen" before, but it's unusual and it's an awesome song. Tonight Matt said they only play it once a year (so I guess I've gotten lucky).


I've also heard "The Geese of Beverly Road" before, but again, it's a wonderful surprise when it gets thrown into the mix. It's one of my favorites.


"About Today" is my favorite closer. It's one of my favorite songs of theirs (tied for first with "Lucky You" and "Apartment Story").


Okay, those were Saturday's highlights. Here are some random highlights from the rest of the week:

They played some new songs which I've heard recordings of but which I was glad to hear in person. "Think You Can Wait" was a highlight. It was featured in the movie Win Win (which you need to see if you haven't already, by the way).

They closed the show every night with an unplugged sing-along version of "Vanderlyle Crybaby Geeks" (with no mics). It's no "About Today" (that will always be my favorite closer), but it's kind of a cool way to end the show. If you want to listen to it, you have to endure my singing (remember no amplification; my mic picked up my own voice because it was closest).


Here are some other songs I loved hearing:
"Slow Show" (always a favorite, no matter how often they play it)

"Start A War" (a great opener for Tuesday's show)


"Available" with the end of "Cardinal Song" (which I LOVE)

"I Need My Girl" (new song). Particularly gorgeous with the violin. This is from Saturday's show, and the audio is from the stream, so it's good quality.

I recorded a few videos and will try to share those later.
Posted by Claire at 6:34 PM No comments:

"Everybody got nowhere to go, everybody wants to be amazing. Rylan you should try to get some sun, you remind me of everyone." ~the national


"Rylan" is a new song that they debuted on Q (a Canadian radio show) last week. I love how Matt spells out 'Rylan' at the beginning of the song. I'm sure he's trying to avoid confusion, because the first time they played "Vanderlyle Crybaby Geeks," everyone was certain he was singing "geese" instead of "geeks." I liked "geese" better; it was like the geese of Beverly Road had returned! He has a tendency to mumble.

This will be a busy week for me. Here's my concert schedule:

Yes, I am seeing The National FOUR times this week, and I'm still looking for tickets to see them on Friday (they're playing six shows at the Beacon). I made the mistake of looking at recent setlists. They've played some rare songs that I really want to hear (Santa Clara!!!), and I can't bear the thought of missing a rarity that I love. I know, I've already seen them over a dozen times, and I'm aware that I'm obsessed. Luckily my brother got me a ticketmaster gift card for my birthday, so that paid for a good chunk of the ticket costs. And I'm not paying to see My Morning Jacket and Band of Horses; my amazing friend Bill is taking me (he won tickets). Anyway, I will be exhausted by next weekend. It'll be worth it, though. Expect a massive review/sharing post after I've recovered (I'll be recording audio and video at all the shows).
Posted by Claire at 10:05 PM No comments:


I love that entire album, and that song ("Shake It Out") was used beautifully in the last few minutes of last night's season finale of Covert Affairs. The end of the episode was lovely; Auggie, who's usually so perceptive, was blind in more ways than one. Hearing him say "I can literally hear you smiling" as we saw Annie sitting there with heartbreak written all over her face (Piper Perabo played the moment very nicely) and then hearing "Shake It Out" starting to play definitely moved me.

Wow, it's been awhile since I've posted. I guess I've been busy. I never even wrote about Thanksgiving, which was wonderful. The night before Thanksgiving I went to see the inflation of the balloons, which was fun. Here's a familiar face: 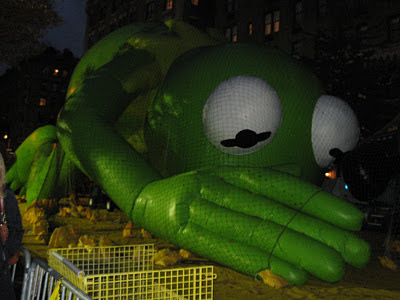 Thanksgiving Day was full of family and food. As usual, it was a full house and I loved seeing so many family members gathered together. Thanksgiving is my favorite holiday. 30+ people always gather in my aunt and uncle's Manhattan apartment, and I look forward to it all year. Here I am with some of my cousins (notice the one whose face has been photoshopped in): 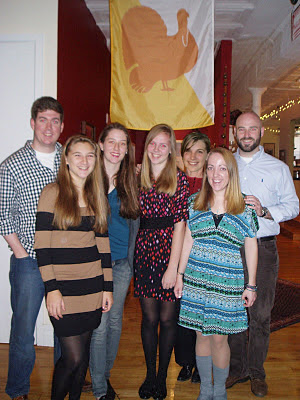 I've seen a few Broadway shows lately. The one I most enjoyed was Bonnie and Clyde, which is unfortunately closing at the end of the month. I'm so glad I was able to see it, though. The music is gorgeous; it's definitely my favorite Frank Wildhorn score. The cast is strong (Jeremy Jordan and Laura Osnes have great chemistry as the two leads), and I think all the design elements are done well (I'm usually not a fan of projections, but in this show I was impressed at how they enhanced the story). It's really a shame that the show is closing, so if you're in/around NYC, I recommend trying to see it.
Here are two snippets of my two favorite songs from the show:

Okay, I'm out of time. Next post will feature my reviews of the Broadway shows The Mountaintop (starring Samuel L. Jackson and Angela Bassett) and Lysistrata Jones.
Posted by Claire at 6:12 PM No comments: