That's from Terry Pratchett's Monstrous Regiment, which I finished reading last week. I love that excerpt. I love that last line about theater. "I would like to eat chocolates in a great big room where the world is a different place." That's exactly how I feel. I've tried to squeeze in a lot of reading recently while I still have the time. I read a good deal of Terry Pratchett this summer because I love him. I'm also really into Richard Russo right now. I finished the Pulitzer Prize-winning Empire Falls (fabulous) and am now reading Straight Man (which is hilarious).

I can't remember the last time I wrote or what I wrote about. But I haven't written about the beach yet. Last Friday my parents and I drove down to Rehoboth Beach. We stayed there until Tuesday (yesterday). It was nice to spend some time with them. It was nice to eat out every night (even though I'm sure I gained weight). It was nice to have nothing to worry about. It was nice to swim in the ocean. Well, most of the time. On Monday the waves were really, really strong. I got pulled under more than a few times in a very short period of time and got roughed around. I kept trying to make my way out of the ocean and kept getting pulled back under. My mom and I banged our heads together (hard) underwater. I lost my goggles and my mom miraculously found them in the ocean. I scraped the whole back side of one of my thighs on the bottom of the ocean floor; it ended up dripping blood all the way up to the bathroom where I washed it off and stuck some paper towels on it as a temporary bandage. But other than that one bad stretch, I loved the beach.
We also went for a disastrous bike ride that I would rather forget. We rode our bikes to a national park and rode around in there, but it took us a lot longer than we expected to bike there so we decided to try taking a shortcut back. Very bad idea. The "shortcut" was a trail in the national park that led out of the park and back towards town. Except the trail was pure sand. Deep dunes of sand. We couldn't bike, so we walked our bikes, pushing them through the sand. I think it took us about an hour to go one mile. And there were swarms of bugs around us the entire time. It was ridiculous. I was miserable.
Every night at the bandstand there was free live music, which I loved. The bands we saw were great. On Saturday it was The Diamonds, who are a famous group from the 1950's, and they were so much fun. I also enjoyed Jamie McLean, who played the first night we were there, and The Bridge.

Now I'm back in NYC and am being forced back into the real world. Tonight was my first grad school class of the semester. Tomorrow I have another class, and I also go back to my job as a teacher. Teachers start work tomorrow. I'm not looking forward to it. The kids start next Tuesday. My summer wasn't long enough; I hardly had any time off (I took classes the entire time) and it flew by. I have to start waking up insanely early and I'm not ready for it.
Posted by Claire at 10:20 PM No comments:

My trend of running into celebrities in the bathroom continues. I went to the Mets/Braves game tonight and ran into Abigail Breslin (Little Miss Sunshine herself) in the bathroom (she seemed very nice). That means this summer, in just 3 months, I've encountered Frances McDormand, Ashley Olsen, and Abigail Breslin in line for the loo. I wonder who will be next.

Unfortunately the Braves, who were winning almost the entire game, fell apart in the bottom of the 8th and lost. But Chipper had a good game and I was just glad to see him play at all (he was out the last time I saw the Mets play the Braves), so I wasn't too disappointed.

There was something I wanted to write about, but now I forget what it was. I'm sure I'll remember later.
Posted by Claire at 11:23 PM No comments:

"Sometimes I feel sitting on trains, every stop I get to I'm clocking that game. Everyone's a winner now we're making the fame, bona fide hustler making my name." ~m.i.a.

Yes, those lyrics are from "that song from the Pineapple Express trailer." I'm glad it's becoming popular because of that trailer, because it's a really good song. Ironically it's not even in the actual movie. Which is hilarious, by the way. I freakin' love James Franco, and he's just so...cool in this film. He has the most gorgeous smile, and I love his long hair. I'm a big fan of Freaks and Geeks, so it was great to see two Freaks and Geeks alums (Seth Rogen and James Franco) reunite. That show did not get the support it deserved.
Pineapple Express trailer:


I saw Hair at Shakespeare in the Park on Friday. I got in line at 6:15am (they gave out tickets at 1:00pm). The seven hours in line went by surprisingly quickly (I read a good chunk of Empire Falls). I went back to my apartment and tried to sleep a little before the show. Of course I turned on the news at 5pm that day just in time to see them issue a tornado warning and a flash flood warning for Manhattan. It rained all evening and the show was supposed to start at 8:00pm, but they kept us outside until 8:50pm. It finally stopped raining at 8:50 and they let us in and started the show at 9:00pm. It had been canceled the night before, so I was really glad they held out and waited for the rain to stop on the night I saw it. I thought it was a great production. Jonathan Groff's last night in it was Saturday (the day after I saw it), so I had wanted to catch it while he was still in it and was glad that I did because I thought he did a good job. The highlight for me was Allison Case's "Frank Mills;" it was really sweet (I love that song). James Rado has been revising the script ever since it was first produced, and it seems to be a more complex, serious, layered piece. Ben Brantley actually gave it a rave in the NYTimes, which is unusual for him.

I can't believe I have to go back to work so soon. I know I'm spoiled in that I had about two months off (not many jobs give you that luxury), but the time flew by. I'm not ready for summer to end. I'll try to make the most of the week-and-a-half I have left.
Posted by Claire at 8:36 AM No comments:

I uploaded my videos of The National from Central Park Summerstage for any fans who are interested.

The Geese of Beverly Road:

Random note: I love Anderson Cooper. Seriously. He's amazing. If he weren't gay I would marry him (I know, I know, as if his sexual orientation is the only thing keeping us apart).

I went to my friend's wedding in Annapolis this weekend. Two of my friends and I drove down on Friday, stayed with my aunt and uncle (who live in Annapolis) on Friday night, and went to the wedding on Saturday. I had a great time. I love Annapolis; it's such a beautiful town. We had perfect weather while we were there. I loved seeing my aunt and uncle. My Uncle Ed took us out on his boat for a quick ride; it's a gorgeous, large, sailboat. The wedding on Saturday was lovely. Maybe I'll write more about it later (and post pictures). I'm tired now, and I'm distracted because I'm watching the Olympics right now (women's gymnastics).
Posted by Claire at 9:07 PM No comments:

"Everyone I know is acting weird or way too cool. They hang out by the pool. So I just read a lot and ride my bike around the school." ~aimee mann

I saw Aimee Mann perform last Thursday at Barnes & Noble. I love her. One of the four books I'm currently reading is Nick Hornby's Songbook. (By the way, if you haven't read any of his novels, go do so now. A Long Way Down is my favorite.) Anyway, Songbook is a nonfiction book about 31 of his favorite songs (I think there are 31). He writes about Aimee Mann, and he says the following about the lyrics I quoted above: "These few words do the job of perhaps as many as seven hundred recently published semi-autobiographical but deeply sensitive first novels." I love that observation.
I went to see her at a cool Barnes & Noble event. She performed a few songs, and the writer Joseph O'Neill read from his book Netherland. There was a moderator who spoke to both of them. Joseph O'Neill is on the longlist for the Man Booker Prize this year and is the favorite to win. A video of the event is online here if you're interested. Here's a photo I took (obviously Aimee is performing and Joseph O'Neill is sitting on the far left): 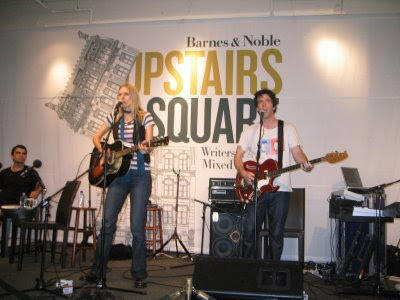 I need to write about The National concert that I went to last night but I don't know if I'm ready for that. So I'll write snippets now. I got in line around 11:45am and was the first one there. They let us in the venue at 5:30pm, the concert started at 6:30pm, there were two opening acts, and The National went on at 8:30pm. It was a long day in the hot, hot, sun, so I was completely drained by the time I got back to my apartment. I'm still drained. But it was sooooo worth it. Because I was the first one there and it was GA, I got the best spot; dead center, front row, right in front of Matt. It was amazing. They played some of the songs that I was dying to hear but wasn't counting on (The Geese of Beverly Road, Karen, Green Gloves, About Today, All the Wine). I recorded it and my recording came out really well, aside from the presence of an annoying screamer standing behind me. I also took pictures (although they didn't come out great) and videos. I can't upload videos until Thursday but will add them to by youtube account then. Here are a couple of pictures: 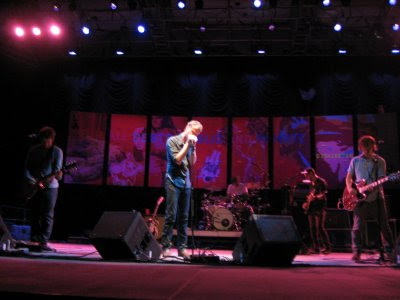 This is Matt during Mr. November. He came into the crowd; it was phenomenal. 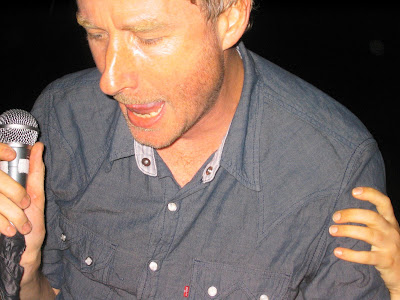 Posted by Claire at 9:23 PM No comments: