I can't believe I haven't written about meeting The National yet (and seeing them in concert from swanky box seats that I won). I've been busy, and this blog post seemed like a massive undertaking that I wasn't ready to handle. But it has to be written (even if it's just to remind myself that it happened, because sometimes I think I dreamed it up), so here goes. Get ready; this is a long one, and it's mostly for myself. 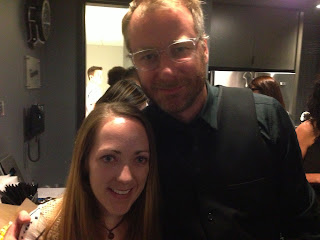 (With Matt Berninger, lead singer of The National and my favorite musician)

I won a radio contest for a Meet-and-Greet with my absolute favorite band in the world, The National (included in the prize were box seats to their concert at the Barclays Center, but I already had two pairs of tickets to the concert before I won, so the tickets were just an added bonus to the Meet-and-Greet for me). I've seen the band live 16 times, I've memorized all their songs, and I cannot put into words how much their music means to me. My main goal was to remain sane when meeting them. I arrived in the suite before the show, and it was stocked with lots of yummy food and drinks. There were a few other contest winners there. After about half an hour, the band walked in. It was surreal; they were just some normal, friendly-looking guys walking into a room, and it seemed like such an everyday occurrence, yet it was also like I was watching their entrance from outside my body and completely freaking out because I knew these seemingly average guys were geniuses. They extended their hands in greeting; Scott approached me first and seemed surprised that I knew his name when I said, "Hi Scott, I'm Claire." I shook all of their hands, and they explored the suite; Matt poured himself a vodka and Red Bull. I started out talking to Scott and Bryce (I'm 99% sure it was Bryce; he and Aaron are identical twins, and although I can usually tell them apart, my brain is a bit fuzzy about that night). People mingled, and Matt (the lead singer) ended up starting a conversation with me. I miraculously managed to keep it together and maintain a conversation with him. I loved listening to him. He is funny, kind, humble, self-deprecating, and charming. I talked to him about the recent PS1 exhibition "A Lot of Sorrow" (which I attended and blogged about already) and told him that I was surprised to see the song "Sorrow" on recent setlists; I thought they'd be sick of it after playing it for six hours straight. He said he thought it was on their setlist for that night's show (Aaron writes the setlists so Matt wasn't sure at the time; they did end up playing it that night), and he said that the PS1 experience actually helped the band better understand the song. I asked if the band would consider doing another run of shows at the Beacon Theatre (they did six shows in a row there in December 2011), and he said possibly, although it was a tiring experience. I told him I liked that run because they varied the setlist each night, and he seemed surprised, like he didn't remember. He said on a tour usually 90% of the setlist stays the same (which I knew), but I told him they did a handful of rarities spread out over those six shows that I was thrilled to hear, like "Santa Clara." He seemed happy to hear that. We talked more about "A Lot of Sorrow" and about the Barclays Center and Brooklyn. There was more I wanted to talk to him about (like his brother's fabulous documentary Mistaken for Strangers), but the band had to go get ready for the show, so we took some photos and they left. I actually had a long conversation with my favorite musician. I wasn't distracted enough by those piercing blue eyes to be struck dumb; I actually spoke to him and listened carefully to him, soaking in everything he said. It's one of those occurrences that you dream about but never expect to actually happen, so I still can't believe it was real. It made the concert even more special, because I kept thinking about how those guys who were onstage captivating 18,000 fans had just been in the same room as me, talking to me. 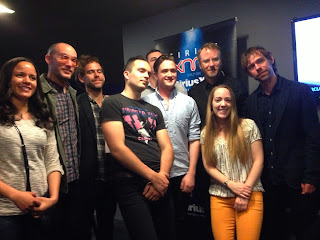 (With the band and the other winners)

The concert was great. Given what I know about their setlists (I knew they weren't going to bring out some crazy, rare song like "The Thrilling of Claire"), I was thrilled with that night's setlist (and I'm proud to say I predicted the encore exactly). They played my favorite songs from the new album ("Graceless," "I Should Live in Salt," "Pink Rabbits," "Humiliation") and a good mix of older songs. I love hearing my favorites "Apartment Story" and "About Today," and "Mr. November," "Abel," "Squalor Victoria" and "Afraid of Everyone" are great arena songs. They somehow made the concert seem simultaneously epic and intimate. There are many glowing reviews (from professionals) about the concert which are interesting; Vulture's includes interviews and presents a nice look at the band's progress, Consequence of Sound's emphasizes the specialness of the hometown show (the band is from Brooklyn), The Village Voice's praises the ability of this indie band to captivate a large arena, The New York Post's marvels at the band's ability to achieve both power and intimacy, and Rolling Stone's raves about the band's triumph in doing what they do best and constructing a finely-tuned set that perfectly displayed their musicality. In some ways it's difficult to watch my favorite band become so popular that they end up headlining arena shows, because it makes it less likely for me to be able to see them in smaller venues, but I'm happy for their success. I honestly think Matt Berninger is the best lyricist currently writing music, so more people should be listening to him. 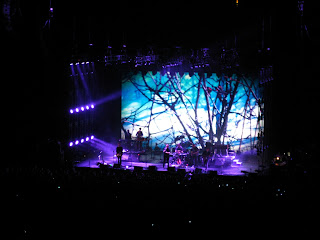 The show was broadcast on the radio, so here are the songs for your listening pleasure* (it's on two playlists because it wouldn't all fit in one; the second one is the encore). It's obviously great quality because it's from a radio broadcast, and it was a fabulous show, so you should listen:

I haven't even written a review of the new album (Trouble Will Find Me) yet. Soon?

*Audio kindly ripped by solace and tracked by mgico at the forums.
Posted by Claire at 8:33 PM No comments:

This is a theater post. I've seen four shows in the past week that I need to write about, but that will have to wait. For now, this is more important:

The Tony Awards are tomorrow! I love the Tony Awards, mostly because of the performances. I don't take the awards too seriously anymore because I believe the most deserving people often don't win just because of stupid factors, like celebrity (Tom Hanks will probably win just because he's Tom Hanks, and that really frustrates me because Tracy Letts was absolutely brilliant in Who's Afraid of Virginia Woolf?). Anyway, I'll still enjoy watching the telecast. Here are my predictions (who I think will win, not whom I want to win):