I realize I haven't written in a long time. But now that I have more free time (because school is out!!!), I'll be able to post more. I have a bunch of show reviews to do, and I'll start with one today.

The House of Blue Leaves
This show just closed on Sunday, and I knew I needed to see it before it closed, so Nic and I got rush tickets one day last week. First of all, can I just explain where our seats were? We were in the front row, and we were in literally the only two seats in that row. Seriously. Because of the wacky stage construction for this show, there are two lonely seats directly in front of the stage. They're not on any seating charts, but they're there. Despite the high stage we had a perfect view, and I thought it was pretty awesome. It was especially cool because in this play they break the fourth wall quite a bit and address the audience. During the play Ben Stiller (in character) knelt down in front of me and showed me a picture of his son. Alison Pill made eye contact with me. It felt like we were actually in the family's apartment. I loved that.

There's been some criticism of this production (and an interesting New York Times review), but maybe because I went in with low expectations, I enjoyed it very much. Is Ben Stiller the perfect Artie? Maybe not, but I didn't mind the fact that he didn't deliver the comedy most people were expecting. I felt sorry for Artie, seeing him as pretty pathetic and knowing right from the start that there was no way his dreams of Hollywood grandeur would ever be realized. Edie Falco was really the star of this production. I thought she deserved the Tony over Ellen Barkin. Her portrayal of Bananas was absolutely brilliant; she was captivating. I couldn't take my eyes off her when she was onstage. I thought Jennifer Jason Leigh as Bunny provided a good foil to Falco's Bananas. Alison Pill was as fabulous as always (I've seen her onstage a bunch of times and she never disappoints), and the rest of the supporting cast was strong as well. I've never seen a production of this play before so I have nothing to compare it to, but I enjoyed David Cromer's production that focused more on the tragedy than the comedy in the play. Seeing so many talented actors who's work I've admired for a long time on the same stage (and from so close a distance) was wonderful.
Posted by Claire at 3:59 PM No comments:

"There's no business like show business like no business I know. Everything about it is appealing, everything that traffic will allow. Nowhere could you get that happy feeling when you are stealing that extra bow." ~irving berlin

Last night was what I considered to be probably the best Tony Awards telecast I've seen. Although there weren't too many surprises (I was 22/24 in my predictions), there were some fabulous performances, some heartfelt speeches, and a lot of laughs. The Tonys are my favorite awards show because so much of the evening is made up of live performances. It's always an entertaining night. I tweeted during the telecast so some of my comments are there, but I'll give you a recap here:

I knew Frances McDormand wound win Best Actress in a Play for her performance in Good People, and I felt she was deserving of the award (although part of me hoped Nina Arianda would win because she's a Broadway newcomer who completely steals the show in Born Yesterday). Anyway, I was looking forward to Ms. McDormand's speech. She's an interesting person. She avoids the red carpet and the press room, she doesn't sign autographs, and she focuses on the work. Here she is after her win: 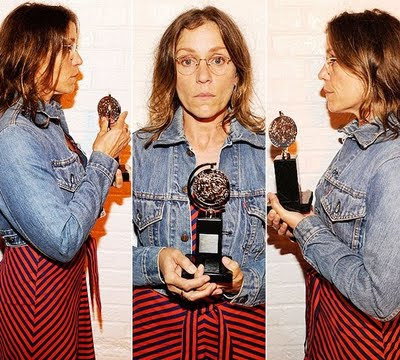 Yes, that is what she wore to accept her Tony award. A jean jacket. I admire the fact that she's so uninhibited. And I liked her speech, especially what I interpreted as a fist pump as she hustled off the stage.


I had hoped the telecast would open with "Hello" from The Book of Mormon, so I was disappointed when that was vetoed (it would have been the perfect opening). The Book of Mormon instead performed "I Believe," which was a surprising choice to me; I would have expected them to choose a song that highlighted both leading men. Andrew Rannells is wonderful in "I Believe," though, and in the end I guess it was a good decision. I love this performance, and I think it captures the show well:

Anything Goes did their title number, which isn't surprising. It definitely is the best number to highlight the choreography (for which Kathleen Marshall won!). Joel Grey introduces the number (I think he means "title song" instead of "final song").


Sutton won! Not a surprise, but it made me happy. I also adore her and Bobby Cannavale as a couple (he's one of my favorite actors), and it was sweet to see her acknowledge him. He was nominated for Best Actor in a Play for The Motherf**ker with the Hat, in which he is brilliant.

I was disappointed that The Scottsboro Boys didn't win anything, despite being nominated for twelve awards. It's a great musical that closed way too soon. Luckily it'll be going on tour soon! It was really nice to see the cast reunite at the Tony Awards for a performance.

How to Succeed in Business Without Really Trying gave Daniel Radcliffe the opportunity to show the nominating committee how crazy they were for not nominating him:

Catch Me If You Can was fun. Norbert Leo Butz, who won the Tony for Best Actor in a Musical, got to show off his stuff.

Let's see, what else? I wasn't surprised Mark Rylance won Best Actor in a Play for Jerusalem, and although some people are outraged that he beat Joe Mantello (The Normal Heart), I don't mind that Rylance won; I loved him in Jerusalem. He gave a crazy speech when he won a few years ago for Boeing-Boeing, and his speech this year was in the same vein; once again he recited a poem by Louis Jenkins.

The Normal Heart did receive two acting awards in the supporting categories, for Ellen Barkin and John Benjamin Hickey. I wanted Elizabeth Rodriguez (The Motherf**ker with the Hat) to win supporting actress, but again, I wasn't surprised that Barkin won. The Normal Heart also won Best Revival of a Play, and I was happy for the show.

I guess that's all for now. I may add more thoughts later. For a list of the winners, go here.
Posted by Claire at 4:30 PM No comments:

"In olden days a glimpse of stocking was looked on as something shocking, but now, God knows, anything goes. Good authors, too, who once knew better words, now only use four letter words, writing prose, anything goes." ~cole porter

Today's a day for show reviews! I'm seeing another one tomorrow, so there'll be more to come soon.

Anything Goes
This show is pure joy. I had a smile on my face the entire time. Where do I start? I guess with the unparalleled Sutton Foster. Is there anything this woman can't do? I think she's superhuman. She's been nominated for five Tony Awards in nine years (five in nine years!). She's a true triple threat; she's an incredibly talented actor, singer, and dancer. Brantley's New York Times review is a complete love letter to Ms. Foster, and it's all true. I believe she's the best musical theater actor of her generation. I can't get over how amazing she is. She's the heart and soul of this production of Anything Goes. This show has a lot going for it, though. First of all, it features some of Cole Porter's best songs (including "You're the Top," "It's de-Lovely," and "I Get a Kick Out of You"). Second of all, Sutton Foster, Joel Grey, John McMartin, Adam Godley, and Jessica Stone are singing those songs. Third of all, Kathleen Marshall is the director/choreographer. I really hope she wins the Tony for best choreography, because the dance numbers really bring this show to life. I was transported me back to the 1920's for a few hours, and I didn't want to leave (actually, that reminds me of Woody Allen's charming new movie Midnight in Paris; review to come, but for now I'll just say it's wonderful). Go see this if you're able to; trust me, it's de-lovely (I'm sorry, I couldn't resist). Take a peek:


Measure for Measure
I went to this summer's first performance of Shakespeare in the Park. The show was Measure for Measure, one of Shakespeare's "problem plays." I definitely see why it's categorized as a "problem play," and I wish Shakespeare were alive so I could question him about his intentions. A few aspects of the ending confuse me; am I really supposed to be happy that two men are basically tricked into marrying women against their (the men's) will? Why does the Duke seem like he's putting on a show at the end; why can't he just reveal himself and what he knows instead of letting Isabella suffer in believing her brother is dead? (I understand the deception up to a certain point, but I think it goes on for too long.) Does Isabella really want to marry the Duke, and what about her commitment to the convent? Anyway, I have lots of questions for Mr. Shakespeare. Putting aside my hesitations regarding the play, I enjoyed this production very much. It's strength is in the comedy. Reg Rogers is particularly hilarious. Lorenzo Pisoni is a charming Duke, and I really liked him in disguise as the Friar (the glasses and a slight awkwardness made him a bit Harry Potter-esque to me). It's obvious that director David Esbjornson is trying to highlight the ambiguity and darkness of the play as well, but I don't know that that worked as well as the comedy (I didn't really understand the creepy demons wandering around). The curtain call music also seemed like a very odd choice (The Rolling Stones' "Sympathy for the Devil 1"). Tonya Pinkins and John Cullum, two incredibly talented actors, are severely underused and I hope they have much more stage time in this season's other show, All's Well That Ends Well. Overall, though, I thought this was a strong production of the play. I was thrilled to be back in the Delacorte. It's one of my favorite places in the world.
Posted by Claire at 7:01 PM No comments:

"It’s early, the birds won’t stop screaming. Don’t tell a soul it’s my birthday. I can’t make my heart stop beating. I had a happy, happy birthday this year." ~the everybodyfields

Look whose first birthday it is! They don't seem to realize that it's a special day. But they are enjoying their new toys. 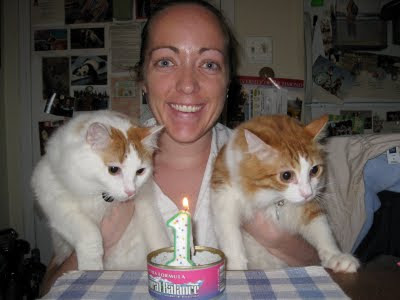 This heat is killing me. My classroom feels like an oven. I've been going home drenched in sweat and depleted of energy every day. It's supposed to cool down, though. This school year needs to end soon. We've all reached our breaking point.
Posted by Claire at 11:22 PM No comments: