"So we wait in the dark until someone sets us free, and we're brought into the light, and we're back at the start. And I know things now, many valuable things, that I hadn't known before: Do not put your faith in a cape and a hood, they will not protect you the way that they should. And take extra care with strangers, even flowers have their dangers. And though scary is exciting, nice is different than good. Now I know: Don't be scared. Granny is right, just be prepared. Isn't it nice to know a lot! And a little bit not." ~stephen sondheim (into the woods)

Shakespeare in the Park: As You Like It
I love this play, and this is a lovely, well-staged production. Lily Rabe is magnificent as always. Seriously, this girl is fantastic. There's also a great supporting cast (including Oliver Platt). Steve Martin wrote the music and he did a fabulous job. Being at the Delacorte watching Shakespeare on a summer evening is one of my favorite things in the world.
I cannot wait for this summer's next SitP show, Into the Woods. It's one of my favorite musicals, and to see Amy Adams, Denis O'Hare, Donna Murphy, and Gideon Glick as part of the cast will make waiting in line overnight totally worth it.

Concert/Album release party: Spirit Family Reunion
Spirit Family Reunion is an Americana/folk/bluegrass band that puts on a great show. The word that first comes to mind is "raucous" (in a good way). The didn't go onstage until after midnight, but they certainly woke everyone up and got the crowd moving and clapping along. 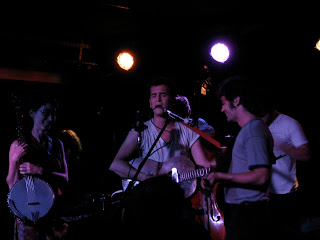 Funny random incident after the concert: I went to the show with my friends Nicole and Maribeth, and while we were waiting on the subway platform for the F train to take us home (around 2:30am), this guy came up to us and asked if we were sisters. We said no, so he asked if we were cousins. We said no again. Nic was carrying the band's record (which has Spirit Family Reunion in huge letters on the cover), and this guy thought it was a sign or something from the family reunion we were coming from. He assumed we were related and our last name was Spirit. It was funny at the time. We ended up talking about bath salt-eating zombies, which was also funny.

That's all for now. I'll leave you with a new picture of my boys. 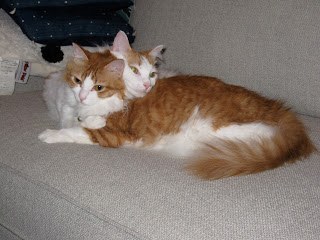 "This is how it works, you're young until you're not, you love until you don't, you try until you can't. You laugh until you cry, you cry until you laugh, and everyone must breathe until their dying breath.
No, this is how it works. You peer inside yourself, you take the things you like, and try to love the things you took. And then you take that love you made, and stick it into some, someone else's heart, pumping someone else's blood. And walking arm in arm, you hope it don't get harmed. But even if it does, you'll just do it all again." ~regina spektor

My jury duty was cut short, so I didn't have as much time on free wifi as I had hoped. But I'm at the library now, ready to post! I'll write about the recent Regina Spektor concert I went to, and I'll post my predictions for the Tony Awards.

Last week I went to a Regina Spektor concert that aired live on NPR's website (video) and on various public radio stations (audio). I went with my friend Bill, and we got a fabulous spot in the front row. I seriously could have reached out and touched Regina's piano. It was a small, intimate show (even though there were cameras all around because the concert was being broadcast). I enjoyed it very much. The show was to promote Regina's new album, What We Saw From the Cheap Seats. I didn't have the album yet (it had only been released two days before), so I was eager to hear some of the new songs and to see Regina perform some of my favorites. I love her album Begin to Hope, and I was thrilled to hear her perform the hits from that record. She sang all my favorites ("Samson," "On the Radio," "Fidelity," "Better"). Here are some videos from the live broadcast (they're my favorites, especially "On the Radio" and "Samson"):

"On the Radio" (Of course she had to play this):

"Samson" (This is such a beautiful, beautiful song, and it's perfect as a closer):

"Ain't No Cover" (this was the first song she did, and she cursed a bunch at the beginning to get it out of her system before going on the air because she couldn't curse on the radio, but she didn't realize she was already live. NPR immediately issued a parental advisory warning.):


There are videos of the whole show on this very, very kind person's youtube feed. I'm really happy they took the time to record and upload the show, because NPR still hasn't posted the archived version on their site. The concert is definitely worth watching/listening. Regina has some funny dialogue talking to people listening to the radio (usually she doesn't talk much while performing).

And now I'll switch to a completely unrelated topic (actually, I suppose it's not completely unrelated, because Regina Spektor is currently writing a Broadway musical). The Tony Awards are on Sunday! Tony night is one of my favorite nights of the year. I'll share my predictions here now (and you can see how I do on Sunday). I'm really rooting for Once, Nina Arianda, and Other Desert Cities. There are a lot of close races this year, so it'll be exciting.

Posted by Claire at 4:20 PM No comments:

So much to write about and still no internet!

I guess I should talk about Kim's wedding. It was absolutely lovely. The ceremony was filled with love and joy and laughter, and I was so glad to be there. The reception was amazing. It was at an incredible venue with beautiful gardens outside and gorgeous, fancy rooms inside. I think there was enough food to feed a small country for a year. During cocktail hour there were a bunch of stations set up with all the appetizers you could imagine (as well as a martini bar), so I was stuffed by the time dinner rolled around. There was also a crazy assortment of desserts after dinner. There was a fun band and lots of dancing, and I had a great time. I knew a lot of people there, and I got to see my parents and brother (my parents also stuck around the next day so I got to spend more time with them in the city, which I was really happy about). Here are some photos: 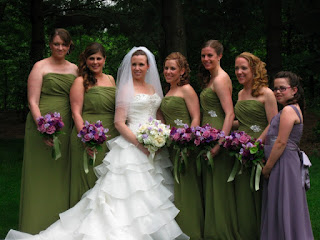 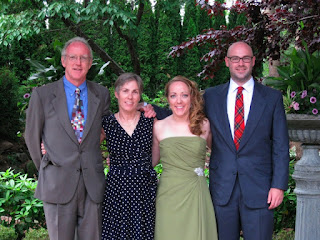 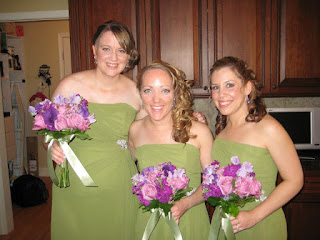 It really was a fabulous, joyful, celebration, and I'm so happy for Kim and Jeff.


Other fun events will be discussed in another post coming very, very soon. I have jury duty now, and I think I'm the only person who's thrilled to be here. There's wifi, so I get to sit around all day using the internet and reading. It's wonderful! So I'll post again soon while I'm able to take advantage of this free time and internet access.
Posted by Claire at 11:49 AM 2 comments: