"We'll stay inside 'til somebody finds us, do whatever the TV tells us, stay inside our rosy-minded fuzz." ~the national

Even though I’ve been on winter break this week and didn’t have to work, to say that I’ve been busy is a massive understatement. I bought an apartment at the beginning of this year, and this week I finally moved into it. I’ve decided that I’m never moving again. If I ever get married, the guy is moving in with me. Seriously, I’m not leaving. Moving is that stressful. Some people have said things to me like, “Well, at least you’re not moving very far away.” Let me tell you something, whether you move across the globe or down the street, it’s still a difficult process. You still have to take everything you own and move it from one space to another, and although I only moved about ten blocks away, it was not easy. I have a LOT of stuff. I bought a bunch of new furniture from Ikea, assembled it all myself (with some lifting help from Nic and Roseann), moved all my stuff, and figured out where it all should go. I did a bunch of work before moving in, because it was easier that way. I painted the apartment and hung everything on the walls in advance so I had less to do when I actually moved. Now everything is basically set up, and I’m so, so happy about it. I love how it looks. I'm having an Oscar viewing party tonight, and I love that I can host it in my new apartment. I'm serving pineapple fritters in honor of The Descendants, Minny's chocolate pie from The Help, Hemingway daiquiris for Midnight in Paris, and mini hot dogs for Moneyball (those were some of my favorite nominees this year). I'm rooting for George Clooney, The Descendants, Viola Davis (I really, really hope she beats Meryl), but I guess I'd mostly just like a good show. I try not to get my hopes up too much, and even the nominations (or the lack of nominations for a few people, like Shailene Woodley, Ryan Gosling, and Albert Brooks) disappointed me a bit, so I try not to be too invested.

I don't have internet at my apartment and probably won't for awhile, so I'm posting this from Starbucks. I don't know how often I'll get to update; I can only eat so many Starbucks pastries (I don't drink coffee).
Here are some photos, and you can see more here (as well as a video tour). 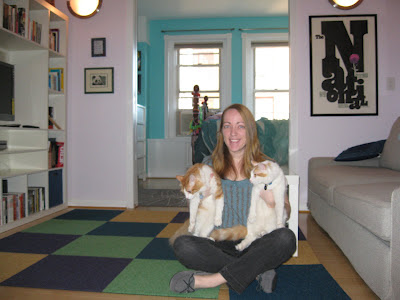 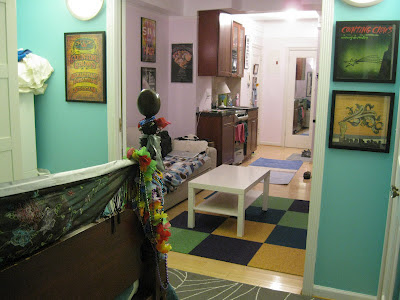 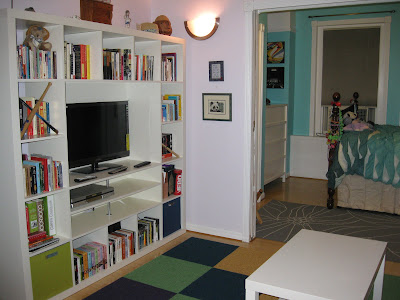 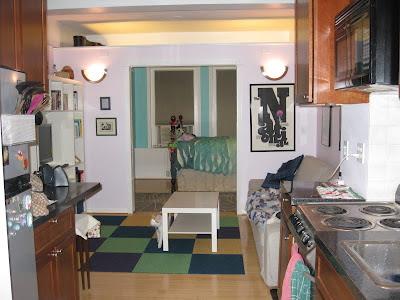 And a couple of my Oscar dishes (Minny's chocolate pie, pineapple fritters for The Descendants): 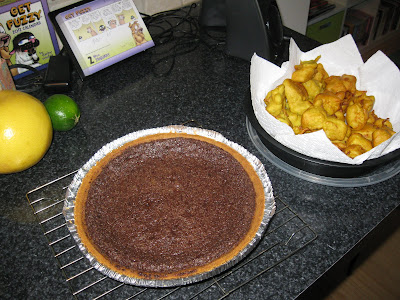 
It's time for recent show reviews!

Merrily We Roll Along
Stephen Sondheim is a genius. The star of this show is the score, because nobody can write a score like Sondheim. Yes, the book is problematic, but I still found the story affecting and tragic. Although I had never seen this show before, I was already familiar with some of the music, and hearing "Not a Day Goes By" sung live (a beautiful rendition by Betsy Wolfe) was a definite highlight for me. Colin Donnell, Celia Keenan-Bolger, and Lin-Manuel Miranda play the three leads. I've seen them all in shows before and I enjoy their work very much, and none of them disappointed in this show. Celia was definitely my favorite. Lin-Manuel nailed his book scenes even though his voice was weak, and Colin Donnell did his best playing a difficult, unlikeable character. The supporting cast (particularly Elizabeth Stanley and Betsy Wolfe) was stellar. This is a tricky, divisive, show, but I loved seeing this production of it.
Richard III
Two-time Oscar winner Kevin Spacey makes just as marvelous a Richard as you could imagine. This is his show. I don't know how he puts so much energy into his portrayal for every performance; he's in almost every scene, the running time is three hours and twenty minutes, and I saw the show on a two-show day. I can't imagine spending nearly seven hours a day throwing yourself wholeheartedly into that character like he does. Mr. Brantley discusses Mr. Spacey's "all-conquering audacity" in his New York Times review. It's interesting. Anyway, the time flew by, and I loved seeing an acting genius playing this classic character. Along with Mr. Spacey's performance, I particularly enjoyed seeing Haydn Gwynne as Queen Elizabeth (I loved her in Billy Elliot).
How I Learned to Drive
This is a chilling, brilliant play (it won the Pulitzer Prize in 1998), and I loved this production of it. Oh my freakin' goodness, it really is wonderfully haunting. Elizabeth Reaser (Grey's Anatomy, the Twilight movies, and most recently Young Adult) plays Li'l Bit, the main character, and I was very impressed with her ability to play the character at different ages so realistically. She captures all the nuances of the complex character. Norbert Leo Butz co-stars, and he's always a treat to see on-stage. He's a two-time Tony winner and I've seen him in a bunch of stuff, and he always impresses me with his versatility. He's absolutely perfect as Uncle Peck. The New York Times review calls him "sensational" and I agree. It's a good review to read. I absolutely love, love, love this play.

Posted by Claire at 7:13 PM No comments: