"All last night you tossed and turned. Your body was hotter than the night that Richmond burned. You say you had a bad nightmare, about tractor trailers crashing." ~the felice brothers

I keep going back to that song. I listen to it in spurts. I'll listen to it over and over. I love the way he sings that line, "You say you had a bad nightmare, about tractor trailers crashing." His voice fades to an almost-whisper during that last word; it really gets me. So I'll listen to it on repeat for awhile, and then months later I'll go back to it. It feels like finding money in a pocket that I forgot was there. Their newest album, Yonder is the Clock, is also wonderful. "Katie Dear" is a highlight for me (not to be confused with the Black Crowes' song of the same name about Robinson's then-wife Kate Hudson). I love all the slow tracks in particular. Check it out; it will definitely turn out to be one of the best albums of 2009. They're playing in New York on August 6th and I've been tempted to buy tickets (it doesn't help that I keep checking back and they're still available). I'm not sure how much stage time they'll get, though (probably not all that much). They're touring with some other bands (Old Crow Medicine Show, Dave Rawlings, Gillian Welch, Justin Townes Earle). It's a format similar to Counting Crow's outing this summer (The Traveling Circus and Medicine Show). I'm more than happy to pay for Counting Crows' touring experiment (I would be happy listening to Adam Duritz read the phone book; in fact, I'd be happy just to stare at him for a few hours), but I'm not sure I can cough up the money to see The Felice Brothers with all those other acts that I don't really care about; it probably won't be worth it. Anyway, I'm enjoying listening to their albums right now. Gosh, I can't wait to see Counting Crows this summer at Central Park. I'm devastated that I'm missing their Hammerstein Ballroom show because I'll be in Colorado. No one seems to get what a big deal it is that I'm missing it, which makes me even angrier. One more (huge) casualty of my parent's move to Colorado, one of many casualties that are invisible to them. By the way, I do realize how completely selfish I'm being. I know, I'm a terrible person. Whatever. As much as I try, I really can't force myself to not feel this way right now. And this is where I vent.

Who wants to go with me to Comic Con next year? Because I really want to go. All the updates on my Twitter page are about it because of whom I'm following. If Chuck is renewed for a third season, I really think I might go. Check out the fabulous Jeffster performance that opened the Chuck panel:


Speaking of TV, I just watched the final episodes of Samantha Who?. I loved the way it ended (except for one minor storyline), but I want to see more! I'm sad it was canceled. It was a really good show. I wish Christina Applegate would win the Emmy this year for her performance.
Oh, and Dirty Sexy Money is airing its final episodes. It's getting really good! I'm mad they canceled that show as well. I can't wait to see how it ends (I hope they tied it up nicely, despite the late-notice cancellation).

I'm back from a fabulous trip to Hilton Head. It felt really nice to spend time at the beach relaxing. We ate some great food, did some shopping, and got lots of sun. Tomorrow my grad school class begins (10am-6pm). Back to the real world. Here we are on our last night of vacation: 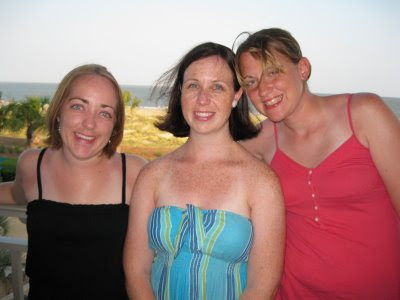 And finally, happy birthday to Katka, one of my (very few) loyal readers! 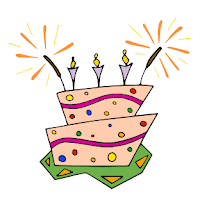 "If you like pina coladas, and getting caught in the rain. If you're not into yoga, if you have half a brain. If you like making love at midnight in the dunes on the cape. Then I'm the love that you've looked for, write to me and escape." ~rupert holmes

I've done a lot of fun stuff recently that I haven't written about. Last Thursday (I think?) I went to a taping of The View in the morning and Jimmy Fallon in the afternoon. It was a talk show day for me! I loooooved Jimmy's interview (and dance) with Lauren Graham. And I totally saw myself in the audience on TV (so did some of my friends, who said I looked like I was hiding)! Here's a photo I snapped at The View: 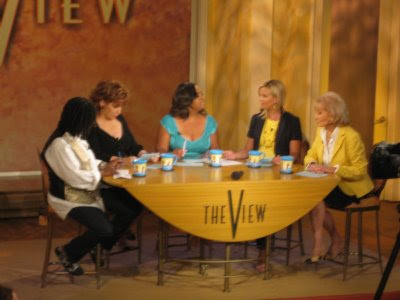 Last Saturday I went to the Siren Music Festival in Coney Island to see Frightened Rabbit, one of my favorite bands. They were fabulous as usual. I'll try to add some music here later. For now, here's a photo. 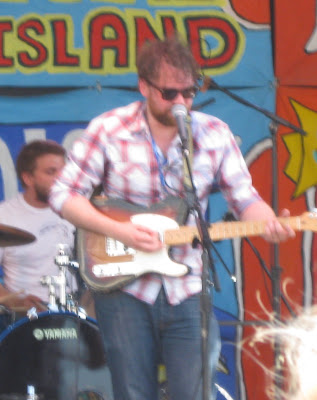 I'm in Hilton Head right now with my friends Kim and Elizabeth, and we're having a great time. It's just sooo nice to not have anything to worry about and spend all day at the beach or the pool relaxing. I got stung by a jellyfish twice yesterday, which was a bummer, but it feels better now. We're staying at Kim's family's time share, and it's a gorgeous place. We have a perfect view of the beach and of one of the hotel's pools. Here are some photos: 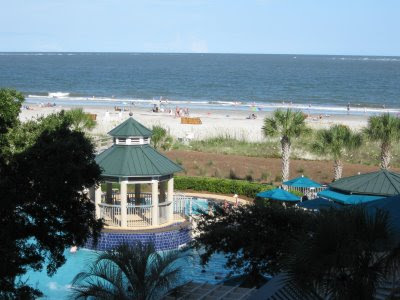 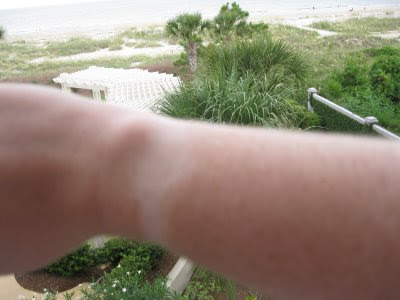 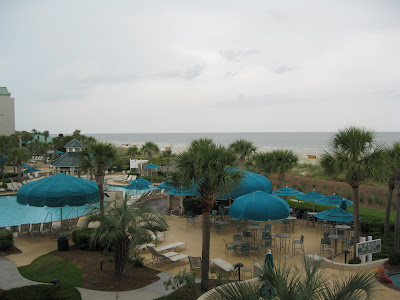 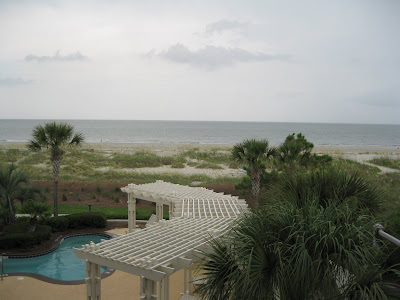 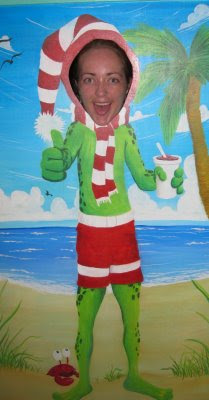 Posted by Claire at 6:32 PM No comments:

"We can change our partners, this is a progressive dance. But remember, it was me who dragged you up to the sweaty floor." ~frightened rabbit

I saw Frightened Rabbit, one of my favorite bands, perform and the Siren Music Festival (in Coney Island) today. They were wonderful. More later (hopefully). But for now, check out this hilarious video. I love the indie movies that they're spoofing, but I still think it's hilarious.

"A gypsy wind is blowing warm tonight. The sky is starlit and the time is right..." ~bob seger

My parents moved yesterday. The house is completely empty. I wasn't there for the final stages of packing and leaving, and I'm glad I wasn't. They're on the road right now somewhere in Illinois (probably further by now), heading to Colorado. I'm also glad I don't have to sit through that 30+ hour car trip. I don't know if I can write about how I feel about the move right now. It's not an easy thing to think about, losing the house you grew up in, where you spent the last 20 years of your life. In fact, it's pretty difficult. Everyone back at home was really great, though. I have some wonderful friends and neighbors there. About 20 people made their homes available to me anytime. At our going-away party a few weeks ago, people kept coming up to me and telling me that they're here for me and I can come stay with them anytime I want to. After one lovely family friend offered to be my second mom whenever I'm sick or just want to be taken care of, my cousin Bess (who was sitting next to me) leaned over and whispered, "Don't these people know you live a 10-minute subway ride away from family? That we'll take care of you?" It felt good to feel so much support. Another woman said to me, "This must be really hard for you." And just that simple acknowledgment meant a lot. Because it doesn't seem like my family understands what the move means for me and how hard it is on me.

On a brighter note (I need to perk myself up now), I had a fabulous night last night. I went to Seth's Chatterbox and watched Seth interview Lauren Graham for over an hour from about five feet away. I can't even tell you how amazing it was. I loved hearing her talk for that long. She was very bubbly and chatty. And of course she looked gorgeous. I went with a friend from Scotland who also stayed with me last night, and it was really nice to have her here.
Here's me and Lauren after the show: 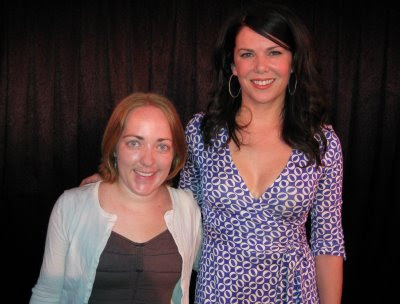 I just got home from a screening of 500 Days of Summer. I was already crazy about Joseph Gordon-Levitt before (go rent the movie Brick and tell me he's not charming), but now I'm even more in love with him. He is SO freakin' adorable. Seriously. I'm swooning here. I loved the movie. Zooey Deschanel was also wonderful as always, and the music was great. Actually, both stars sung in the movie, and of course I'm a huge fan of Zooey's singing career, but I was particularly impressed with Gordon-Levitt's vocal abilities. He sang "Here Comes Your Man" (SUCH a good song), and he has a great voice. Go see this movie when it opens.


Fun news: I bought a bike to use here in the city! It's a folding bike, and I love it so far. I live right next to Central Park, so I have the perfect place to go and ride. 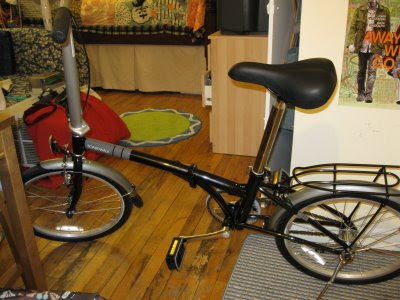 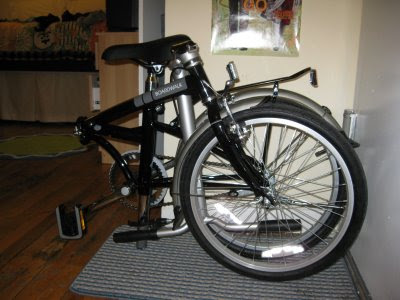 
Oh, so much to write about and so little energy. I'm going to focus on the 4th of July because that's what's in the forefront of my mind. I'll probably backtrack later. This is mostly a photos post because I'm tired.

Today I went to see Conor Oberst and Jenny Lewis in concert in Battery Park. I love both of them; I was introduced to them when they were the frontmen of the bands for which they're famous (Bright Eyes and Rilo Kiley, respectively), and I've followed their careers with interest. I haven't seen either one live before. The concert was fabulous. The weather was perfect (clear sky, breezy), and there was a great energy in the park. There were tooons of people there, but I arrived early and got a good spot. Here are some of my photos (cropped so they'll fit in this narrow blog):
Jenny Lewis: 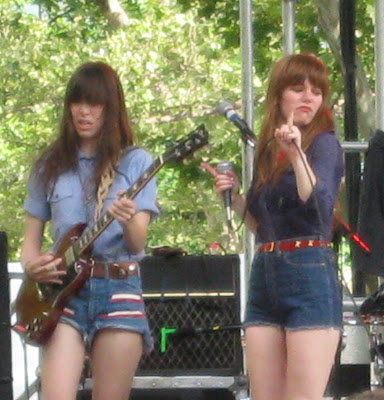 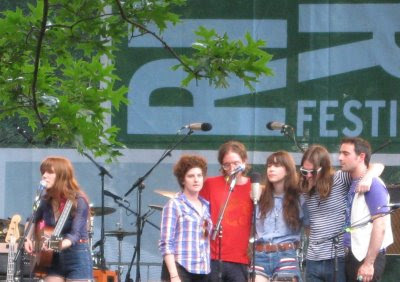 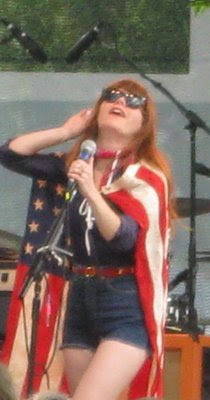 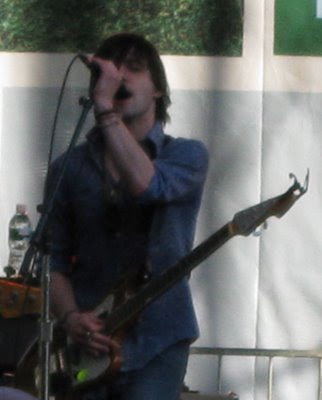 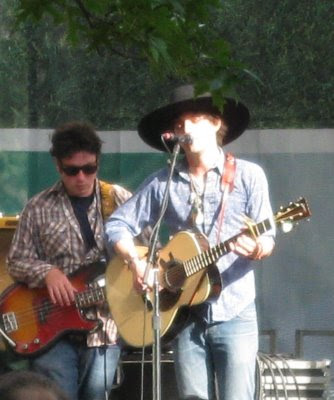 Tonight I went to the West Side Highway to see the NYC fireworks, which were wonderful. Here are a couple of (not so great) photos that I took: 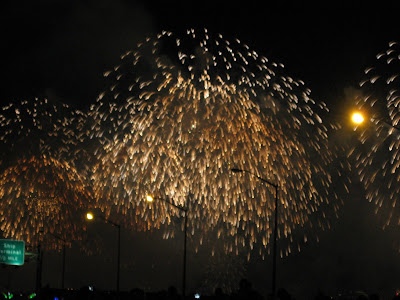 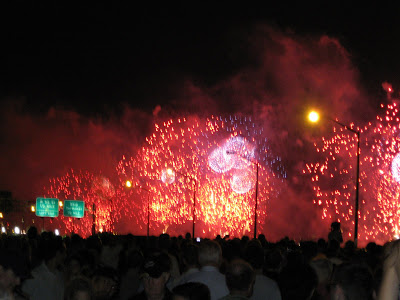 Gosh, I'm in such a Bright Eyes mood right now after seeing Conor Oberst today. I love that voice. I can't stop listening to "Lua" (lyrics opening this post). What a gorgeous song. Conor does a nice version of it with Gillian Welch on the Dark Was the Night compilation. I still think I slightly prefer his original version, though.
Posted by Claire at 10:26 PM No comments: