I'm not sure why I don't write about books here very much. I love books, and I'm an English teacher. I did write a post about my favorite books of 2012, so check that out if you haven't yet. Right now I want to talk about YAlit. One of the current trends in YAlit is dystopian series. I love dystopian novels; I guess Lois Lowry's The Giver is one of the earliest ones that captivated me, and I've been addicted to the genre since I read Margaret Atwood's The Handmaid's Tale in high school (that book was also the beginning of my obsession with Margaret Atwood). Just the concept of dystopian lit fascinates me; I love seeing different authors' visions of what our world might become. I love reading about the past, but I also love seeing visions of the future; I understand we learn from the past, but I also believe these imagined future worlds can inform the decisions we make as a society going forward.

There are many new dystopian series/novels out there, but there are three trilogies that are probably the most popular. They're also really, really good. It seems like pretty much everyone has read The Hunger Games trilogy. The second one is the Matched trilogy by Ally Condie. The series follows a girl named Cassia who struggles against the path that her society has planned for her. I mentioned this series in the post I lined earlier (my favorite books of 2012). I love the importance of art and creativity in the series (especially the significance of writing). The third is the Divergent trilogy by Veronica Roth, and it might just be my favorite (or maybe that's because it's the most recent one and I'm eagerly awaiting the conclusion; the third book in that series is scheduled to come out this October, and I can't wait to read it). The Divergent series is about a girl named Tris (Beatrice) who lives in a world that is organized around five key virtues (bravery, selflessness, intelligence, honesty, and peacefulness) and has to deal with the growing divisions between these factions.

What I love about these three trilogies is that each one portrays a strong female protagonist who must make difficult choices. These are great books for young adults because they're full of adventure, but they also make kids contemplate difficult issues and consider the effects of different social and political structures. These books aren't just for kids, either. I'm an adult and I devoured them all. So if you're looking for some entertaining and thought-provoking reads, check out these series.

On a related note, this leads into a quick discussion about one of my favorite actresses, Shailene Woodley. She was fabulous in The Descendants, she was lovely in The Spectacular Now (currently in theaters), and she happens to be starring in two upcoming movies based on books that are favorites of mine. She's playing Tris in Divergent, and she's also starring in John Green's The Fault in Our Stars. If you haven't read that book, go buy some tissues read it right now (it was Time Magazine's #1 Fiction Book of 2012 and it's fabulous). I'm always nervous when books I love are adapted for the big screen, but the casting of Shailene Woodley in these two films gives me hope.

Add me as a friend on Goodreads if you want to keep up with what I'm reading. I'm very excited for Marisha Pessl's Night Film to be released (August 20th!). Her first novel, Special Topics in Calamity Physics, is one of my favorites (add that to your reading list, too!). I saw her speak when she was promoting that novel (in conversation with Jennifer Egan!) and was very impressed with her. I wrote about the event here. I can't wait to read her second novel.

Since I'm full of recommendations today, I'm adding one that's not a book. Go watch Top of the Lake. It's a miniseries that's available on Netflix, and it is so. Freakin'. Awesome. I finished it today and I'm sad that it ended because I want to keep watching I love it so much. It'll probably win a bunch of Emmys. Check it out.

It feels like I'm spending more time outside of NYC this summer than I'm spending here at home. This summer I will have spent time in upstate NY, Greensboro, NC, Iowa, Colorado, Williamsown, MA, and New Orleans. I'm back for another brief stint before heading to the Williamstown Theatre Festival this weekend and then going to New Orleans next week. I spent last week in Iowa (for a family lovely reunion) and in Colorado visiting my parents, and it was nice to spend time with so many family members, especially because I don't get to see many of them very often.
Here I am with some of my cousins and our grandmother: 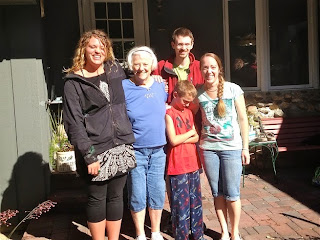 And here I am in Colorado after a long hike: 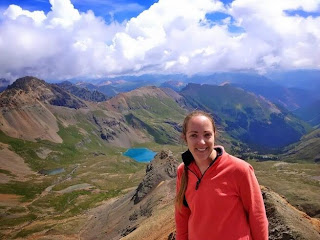 You've probably already seen this, but it's still worth posting. I love Mumford & Sons (search my blog for my concert post on them), and I love that they have a sense of humor and don't take themselves too seriously. I also love Jason Bateman, Will Forte, Ed Helms, and Jason Sudeikis, so this is pretty awesome.

I'll hopefully have a good review of the musical The Bridges of Madison County (music by Jason Robert Brown!) to share after this weekend.
Posted by Claire at 5:36 PM No comments: