"In New York he is laid in a glass covered case. He pretends he is dead, people crowd 'round to see him. But each night she comes 'round, and the two wander down the halls of the tomb that she calls a museum. Often he stops to rest, then less and less, then it's her that looks tired, staying up asking questions. He learns how to read from the papers that she is writing about him, and he makes corrections. It's his face on her book, more come to look. Families from Iowa, Upper West-Siders. Then one day it's too much, he decides to get up, and as chaos ensues he walks outside to find her. She is using a cane, and her face looks too pale. But she's happy to see him, as they walk he supports her. She asks, "Are you cursed?" But his answer is obscured in a sandstorm of flashbulbs and rowdy reporters." ~josh ritter


I've posted a lot about The National lately, and there's more to come (including my thoughts on their newest album and a concert post after I see them next week), but for now I'm taking a break to write about a concert I went to last weekend. I've been so busy that I haven't had time to track and upload audio/video until today. It's a lot of work.

On May 18th, I went to see Josh Ritter and The Felice Brothers. I got a spot in the front row, which is always nice, especially for a shortie like me. I mostly went to see The Felice Brothers, who were the opening act. I think I've posted about them a lot; they're one of my favorite bands (in my top 5 at least). They're a lot of fun live, and this show was no exception. I always like to hear new songs, so a highlight for me was "Butch Cassidy." It was also nice to hear a couple of my faves, "Frankie's Gun" and "Saint Stephen's End." Here's my audio: 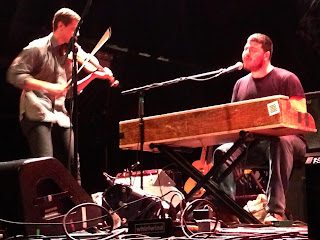 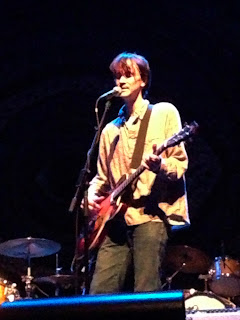 The coolest about seeing The Felice Brothers this time was meeting them after the show. They were hanging out at the merch booth, so I went and talked to them, and they were SO incredibly nice. They signed a CD for me (writing, Thanks Claire, we love you) and were perfectly happy to stand there and chat. I took a photo with Ian Felice (the lead singer). They were just so kind and friendly, and it made me really, really happy. 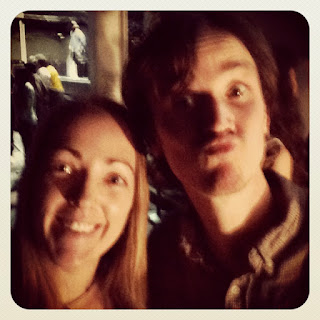 Josh Ritter was the headliner of the concert, and his set was one of the most uplifting, feel-good sets I've ever heard. He had the biggest smile plastered on his face throughout the show; he seemed so grateful and happy to be there, and he made the most of the experience. He played a lot of songs from his newest album (which is awesome) as well as some old favorites. I was most excited to hear "The Curse" (quoted in the opener of this post; I love the story it tells), "Change of Time," and "Joy to You Baby." Do yourself a favor and listen to my audio or video. I recommend starting with "The Curse," which starts my favorite part of the show. After that he does the two best songs from the new album (in my opinion), "Joy to You Baby" and "New Lover." 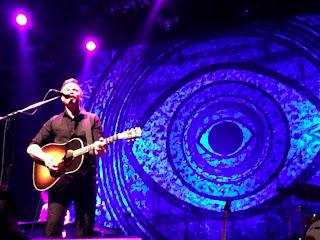 I took video of both shows, but my video of The Felice Brothers is really shaky because I can't help but dance to their music, so I was moving around a lot. I haven't uploaded those videos yet, but I might later, so check back here. I controlled myself a bit more during Josh Ritter. I uploaded my favorite videos from his set; I could only limit myself to eight (I loved the whole show). If anyone reading this is dying for a video of another song (or of The Felice Brothers), let me know. Here's the playlist (definitely check out "The Curse," "Joy to You Baby," and "Change of Time"):

Overall it was a great concert, and I was thrilled to be there.
Posted by Claire at 10:27 PM No comments:

"And wouldn't you  rather be a left-handed flea, a crab on a slab at the bottom of the sea, a newt on the root of a banyan tree, or a fig on a twig in Galilee, than a man who never learns how to be free?" ~stephen schwartz, pippin

Last weekend I went to see the Broadway musical Pippin. Oh my goodness, it was absolutely wonderful. It just won more Outer Critics Circle Awards than any other show, and I'm betting it will win a bunch of Tony Awards as well. I really hope Patina Miller wins Best Actress in a Musical. She's playing the Leading Player (the role played by Ben Vereen in the original production), and she's giving a great performance. You can see her sharp edges behind the brilliant smile she displays. Andrea Martin should also win a Tony (for Best Supporting Actress in a Musical); she brings down the house in her one big number. The production's acrobatics are astounding, and it's a well-done show all around. The cast recently performed "Simple Joys" on The Late Show with David Letterman, and although it's an incredibly scaled-down performance that doesn't showcase what they really can do (and it's not the song I would have chosen), it's still fun to watch. I really hope they do "Magic to Do" at the Tony Awards.

Posted by Claire at 6:14 PM No comments:

Last weekend I was able to attend a really special event that maybe not everyone would have enjoyed but which meant a lot to me. My favorite band, The National, played their song "Sorrow" for six hours straight at MoMA's PS1. They played the song 105 times. It's hard to describe the experience, but this article does a really good job and I recommend reading the whole article. Here's just an excerpt:


Repetition is a commonly used motif in both art and music, but how many hours of despondent wallowing can one audience handle from one of the world’s most gloriously depressing bands?
“Sorrow” is a dirge of a tune, fueled by an almost break-beat-like drum line, a brass section and Matt Berninger’s purposeful, harrowing baritone. A track off their 2009 album High Violet, it begins in a typically National-istic manner: Sorrow found me when I was young / Sorrow waited / Sorrow won.

....It wasn’t until Berninger began to cry, choking on his words in the last ten minutes of the performance, that the well of emotion seemed to finally overflow, and we realized it was our turn to take over. An incredibly passionate a cappella delivery from the crowd ensued, as naturally, we had all 142 words etched in our brains’ gray matter by that time. There’s a shared experience in trauma. We were in this together. And perhaps that’s why, once the band left the stage and Kjartansson thanked us all for enduring it, we screamed for an encore. After a few minutes, the band stumbled back on. Glass of wine in hand and with a weary yet devious smile, Berninger leant into the microphone. We held our collective breath.
“This one’s called ‘Sorrow,’” he said.

I recorded a good chunk of the performance (I made sure I got the last four hours), and here's the version where Matt broke down in the middle of the song (it's version #100):

I love unique stuff like this, especially when my favorite band is involved.
Posted by Claire at 4:10 PM No comments: