Yesterday I went to the second annual Global Citizen Festival. I went last year (and posted about it here), and I was excited to return this year. The weather was beautiful; it was a perfect day to spend in Central Park with 60,000 other people. We got a great spot in the front of pen 1 on the rail, right behind the VIP section. Kings of Leon opened, and they were followed by Alicia Keys, John Mayer, and Stevie Wonder. Between sets, appearances were made by Elvis Costello (who performed two songs), Janelle Monae (who performed one song), Bono (who presented an award), Katie Holmes, Olivia Wilde, Gerard Butler, and more. Here's a video I made of some highlights (the concert was streamed online, so I'm sure official videos will be popping up online):


Tonight is the finale of Breaking Bad (the show that many have argued is the best TV show ever made). It's weird to think that after tonight it will be over. I'm hoping Walt dies and Jesse lives. In honor of the finale, here's Los Cuates de Sinaloa performing "The Ballad of Heisenberg" on Conan.

Monday's entire episode of Conan was devoted to Breaking Bad, and it was pretty awesome. It was the day after the show won the Emmy Award for best drama series, and the whole cast seemed very happy. Here's the show if you want to watch it. And here's a great compilation of "five years of awesome interviews in 176 seconds" (no huge spoilers in this video, so I think it's safe to watch if you haven't seen the show).


Nic and I are watching the finale air tonight, and she's making a themed menu. My themed contributions are homemade funyuns in honor of Jesse Pinkman, Ben and Jerry's in honor of Landry Todd feeding Jesse in last week's episode (sorry, Jesse Plemons will always be Landry from Friday Night Lights to me), and this (crushed blue jolly ranchers): 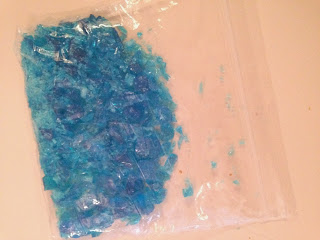 Happy finale, bitches!
(Okay, last of the videos. These are the best ones. I never ever curse, but this has become such an integral and entertaining part of this character.)


And finally (this is it, I promise; I'm going all out for the finale), 35 Reasons Why Aaron Paul Should Be Your Favorite Actor on Television.
Posted by Claire at 3:03 PM No comments:

The Emmys last night were a freakin' disaster; whoever directed that telecast should not get the job again next year (and Neil Patrick Harris bombed). The highlights for me were Amy and Tina heckling NPH, Tony Hale winning for Veep(!), Anna Gunn winning for Breaking Bad, Breaking Bad winning best drama series(!), and these two acceptance speeches:

I love Merritt Wever, and this further solidifies my feelings. Best acceptance speech ever?

And Julia Louis Dreyfus enlisting her costar Tony Hale in this bit based on their characters' relationship in Veep (with a cameo by the awesome and hilarious Anna Chlumsky, also in character):

Of course I was rooting for Amy, but I do love Veep and realize how fantastic Julia Louis Dreyfus is.

It was a great weekend. Sunday not only featured the Emmys but also the BC/EFA Broadway Flea Market, one of my favorite events of the year. I got lots of cool Broadway swag. This weekend I also got to catch up with my friend Kelly, who came to visit. We explored the awesome exhibit on children's books that's currently on display at the NYPL, and we went to the Brooklyn Botanic Garden. It was the perfect day to be outside and see some beautiful flowers, and I was glad to spend time with my friend.

Next weekend is the series finale of Breaking Bad! Nic and I are having a viewing party (I hosted the Emmys so she's hosting the finale) and I can't wait to see how it ends. Yesterday's episode kind of tore me apart.
Posted by Claire at 6:26 PM No comments:

It's pretty sad that I've spent time watching Sesame Street videos on youtube, but there are fun songs by Feist, Train, Hootie and the Blowfish, Johnny Cash, and lots more. Here are a couple more favorites, just for fun:

And finally, just because:

Posted by Claire at 4:24 PM No comments:

Back to music for a quick minute. Robyn. "Dancing On My Own." Two very different versions of this song. Here's Robyn's original version featured in an episode of Girls (this might be my favorite scene of this show):

I realize I haven't written here in awhile and haven't posted any recent pictures. I've had lots of great experiences in the past month, and you can see some photos from those experiences here. I visited New Orleans (great food and great music), saw The Bridges of Madison County at the Williamstown Theatre Festival, and, most recently, went to the U.S. Open.

I just finished Marisha Pessl's Night Film; I read it in two days (and it's not exactly a short novel). I couldn't put it down. I love Marisha Pessl. I haven't read Special Topics in Calamity Physics since it came out (seven years ago), but now I want to go back and reread it just so I can hear more of Marisha Pessl's voice. I hope she doesn't wait seven more years before publishing her next novel.

I've seen three shows in the last two days, two of which were fabulous. (Mr. Burns was not fabulous in my opinion, so I won't talk about that; I usually only write about positive theatre experiences here. Ben Brantley loved the show, though, and called it "downright brilliant," making it one of his critic's picks, so what do I know? I think the fact that I've never watched The Simpsons hindered me with that one.) I saw The Tempest at Shakespeare in the Park on Friday. It's a magnificent production featuring some great Broadway performers, including Norm Lewis and Laura Benanti, as well as 200 New Yorkers from various community organizations. It's quite ambitious to have so many people onstage, but it made for some fantastic moments of theater. It was well worth the 4.5 hours I spent in line for tickets (and it was a beautiful day to wait in Central Park).

Last night I saw The Glass Menagerie on Broadway. I remember studying this play in college and writing essays on it; it greatly moved me when I read it, so I was eager to see it performed onstage. This production is absolutely perfect; it's simply exquisite. I cannot say enough good things about it and cannot imagine a better staging of the play. The production transferred to Broadway from Cambridge, and Ben Brantley's New York Times rave review of that production expresses my feelings better than I can. Zachary Quinto plays Tom, and I'm a fan of his so I was eager to see his performance; I loved seeing him onstage in Angels in America (he's probably best known as Sylar on Heroes, Spock in the new Star Trek movies, and for his role in American Horror Story). He plays Tom with weariness that weighs down his every step and anguish and vulnerability that contort his face; his performance made the character resonate with me in in ways that didn't hit me when I read the play. He's heartbreaking, and he's the soul of the play. Cherry Jones (whom Mr. Brantley calls "perhaps the greatest stage actress of her generation") is fantastic as Amanda. When she reminisces about the past to escape the reality of the present, she transports you into those memories, and the shift back to reality is painful. Celia Keenan Bolger (a theatre favorite of mine; she most recently starred in Peter and the Starcatcher) is Laura, and she's a perfect mix of fear, hope, surprising strength, and eventual devastation (which sounds like a strange assortment of feelings, but it's what I sensed and it works). This play is gorgeous and devastating and proof that Tennessee Williams was a genius. This production feels like the perfect example of what the play should look like onstage. If you are in New York in the next few months, go see it.
Posted by Claire at 5:36 PM No comments: