I love love love this movie, and I can't wait to see it again!

Claire’s Favorite Books of 2014
These are my ten favorite books I read that were published in 2014. There’s a long list of books from this year that I own but have not gotten around to reading, and it’s likely they will influence this list, but I probably won’t get to many of them before the year ends. They are listed at the end.

1. Station Eleven - Emily St. John Mandel
This is a gorgeous dystopian novel that takes place after the Georgian flu has killed 99% of humanity. The story alternates between a few different characters and time periods, but it mostly follows the Traveling Symphony, a group that travels around performing Shakespearean plays and music. This was my favorite book of the year; it’s hopeful and lovely and I didn’t want it to end but could not put it down.

2. Fourth of July Creek - Smith Henderson
This novel focuses on Pete Snow, a social worker in Montana in the early 1980’s. The story focuses on one particular case he’s working (a young boy who lives in the wilderness with his radical father). The prose is gorgeous. This book broke my heart; I absolutely loved it. It comes in at a close second on my list.

I love Liane Moriarty. I loved The Husband’s Secret soooo much, and I didn’t think it was possible, but this novel might be even better. It’s just so entertaining. It’s a mystery, and it’s also hilarious. The characters feel so compellingly real. You will not be able to put it down.

4. The Paying Guests - Sarah Waters
You might not expect a historical fiction novel that takes place after World War I to be such a page turner, but oh, how this one is! It may start off slow, but it escalates into a wonderful thriller.

5. We Were Liars - E. Lockhart
This book is pretty divisive, but I love it. I  love the use of fairy tales. It’s tragic and intriguing and suspenseful and heartbreaking. It’s a YA novel, but I think it’s a wonderful book for all ages. I became a fan of E. Lockhart with The Disreputable History of Frankie Landau-Banks, and she didn’t disappoint with this novel. (I also met her and she’s absolutely lovely.)

6. The Dead in Their Vaulted Arches (Flavia de Luce #6) - Alan Bradley
Alan Bradley’s Flavia de Luce novel’s are my favorite series. Flavia is one of my absolute favorite literary characters; she’s a young, brilliant chemist/detective who is way too smart for her own good. In this particular novel, she investigates the death of a mysterious stranger. More information about Flavia’s mother is revealed, and Flavia is just as marvelous as usual. The next book in the series comes out very, very, soon, and I have been waiting for it! 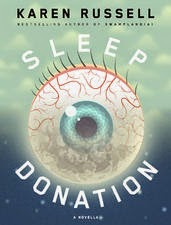 7. Sleep Donation - Karen Russell
Karen Russell’s Swamplandia! completely bowled me over a few years ago, so I was anxious to read Russell’s new novella, Sleep Donation. It’s not as good as Swamplandia!, but it’s haunting. It takes place in the near future, when America is facing a plague of insomnia. Trish works for a corporation that collects sleep donations from healthy sleepers to give to insomniacs. It’s an interesting premise with a deep, philosophical question underlying the story.

8. I’ll Give You the Sun - Jandy Nelson
This is another YA novel that I think everyone should read. Jude and Noah, twins, alternately tell the story. Noah narrates when they are thirteen and Jude when they are sixteen. I love the way the story is told; alternating between the two time periods/narrators reveals bits of information that you have to put together, eventually leading to a clear picture of what has happened to the twins. The writing is lovely, and it will fill your heart with feels.

9. The Silkworm (Cormoran Strike #2) - Robert Galbraith (J.K. Rowling)
I’m enjoying J.K. Rowling’s mystery series very much. Cormoran and Robin make an entertaining pair of investigators, and in this book, the mystery is compelling and unpredictable. I can’t wait for the next one.

10. The Vacationers - Emma Straub
This was an entertaining summer read about a family on vacation in Mallorca.

2014 Books That Are Currently in my Library Waiting to Be Read
Ugly Girls - Lindsay Hunter
All the Light We Cannot See - Anthony Doerr
Everything I Never Told You - Celeste Ng
We Are Not Ourselves - Matthew Thomas
Nobody Is Ever Missing - Catherine Lacey
Young God - Katherine Faw Morris
How to Build a Girl - Caitlin Moran
Missing Reels - Farran Smith Nehme
Posted by Claire at 4:16 PM No comments:

Are you watching Peter Pan Live? It's a fun show. Allison Williams is a great Peter Pan (she can sing and act!); I'm a fan of hers from Girls, and I was excited to see her in this role. Christopher Walken is absolutely hilarious as Captain Hook, just because he's Christopher Walken and he basically speaks all the songs and it's bizarre and ridiculous. Who knew he was such a good tap dancer?! Kelli O'Hara is wonderful. Anyway, I'm enjoying the show, despite a few complaints (it's not as good as it could be; I'm not crazy about the sets and the costumes and some wacky shots/camera angles/sloppy filming). I'll probably add videos later once they start popping up online, but for now I'll just post this video from July 30th's Nightly News because I thought it was sweet to see Brian Williams as a proud papa. I also think it's sweet that he missed tonight's Nightly News to watch the broadcast live.

Last night I was fortunate enough to attend the U2 Minus One concert in Times Square. It was a surprise show as part of World AIDS Day. Bono was the minus one due to his recent Central Park biking accident, but Chris Martin of Coldplay and Bruce Springsteen were kind enough to fill in for Bono and perform with U2. Carrie Underwood and Kanye West also performed. Despite the rain, the concert was a blast. Chris Martin sang "Beautiful Day" and "With or Without You" with U2 to open the show, and Bruce Springsteen sang with them on "Where the Streets Have no Name" and "I Still Haven't Found What I'm Looking For" to close the show. All of U2's songs were magical. I loved hearing Bruce Springsteen and Chris Martin sing with the band. I don't care whether or not you're a fan of U2, I don't see how anyone could not be moved by those anthems that they performed last night.
There's a nice review of the concert here.
And the whole show is online. You should at least watch the first two songs (U2 with Chris Martin) and the last two (U2 with Springsteen, starting around the 37-minute mark in the video). Seriously, magical. I'm so glad I was able to be there. I posted four videos on my instagram so you can see a glimpse of my view (and a few of my photos are below). 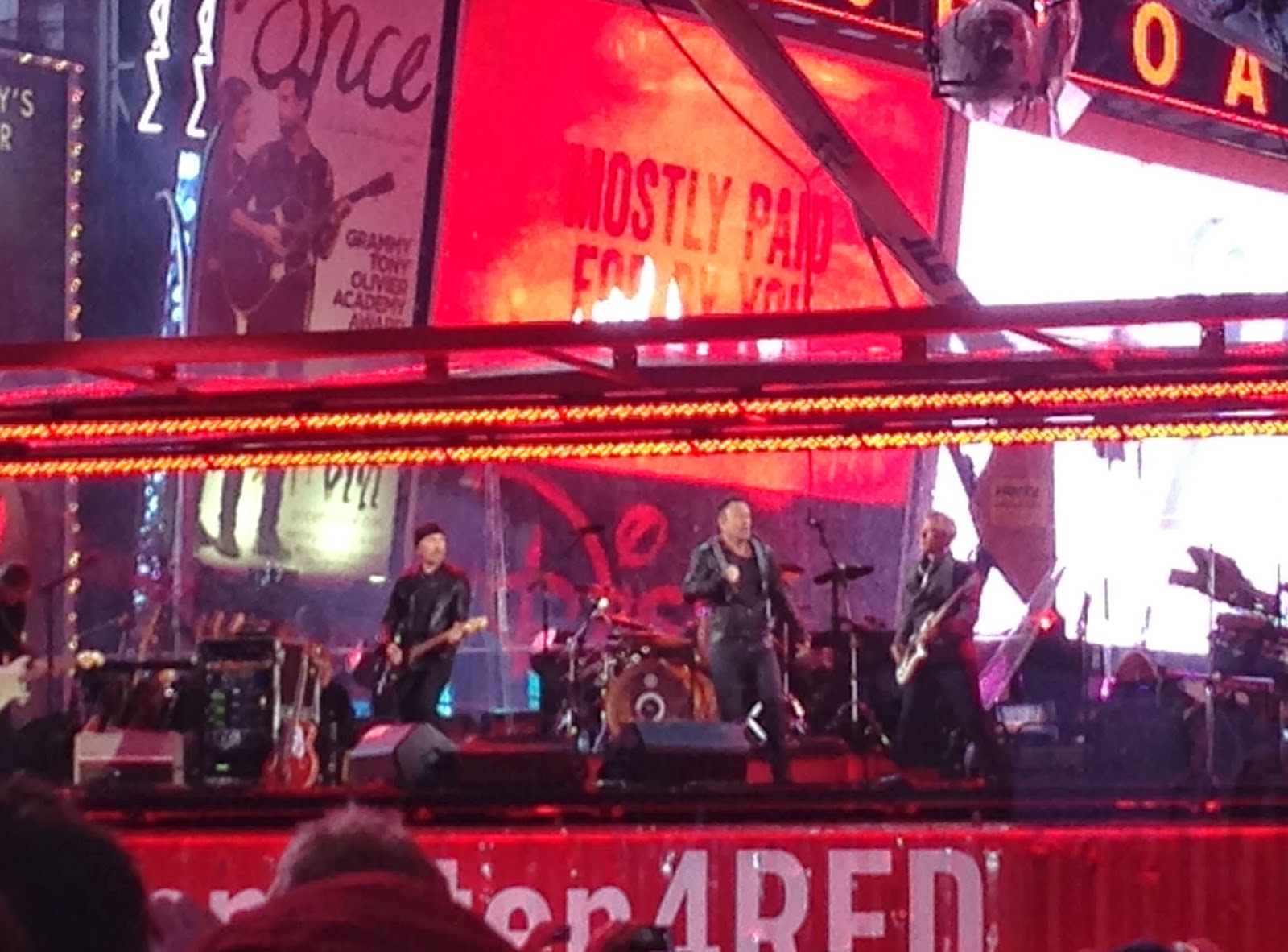 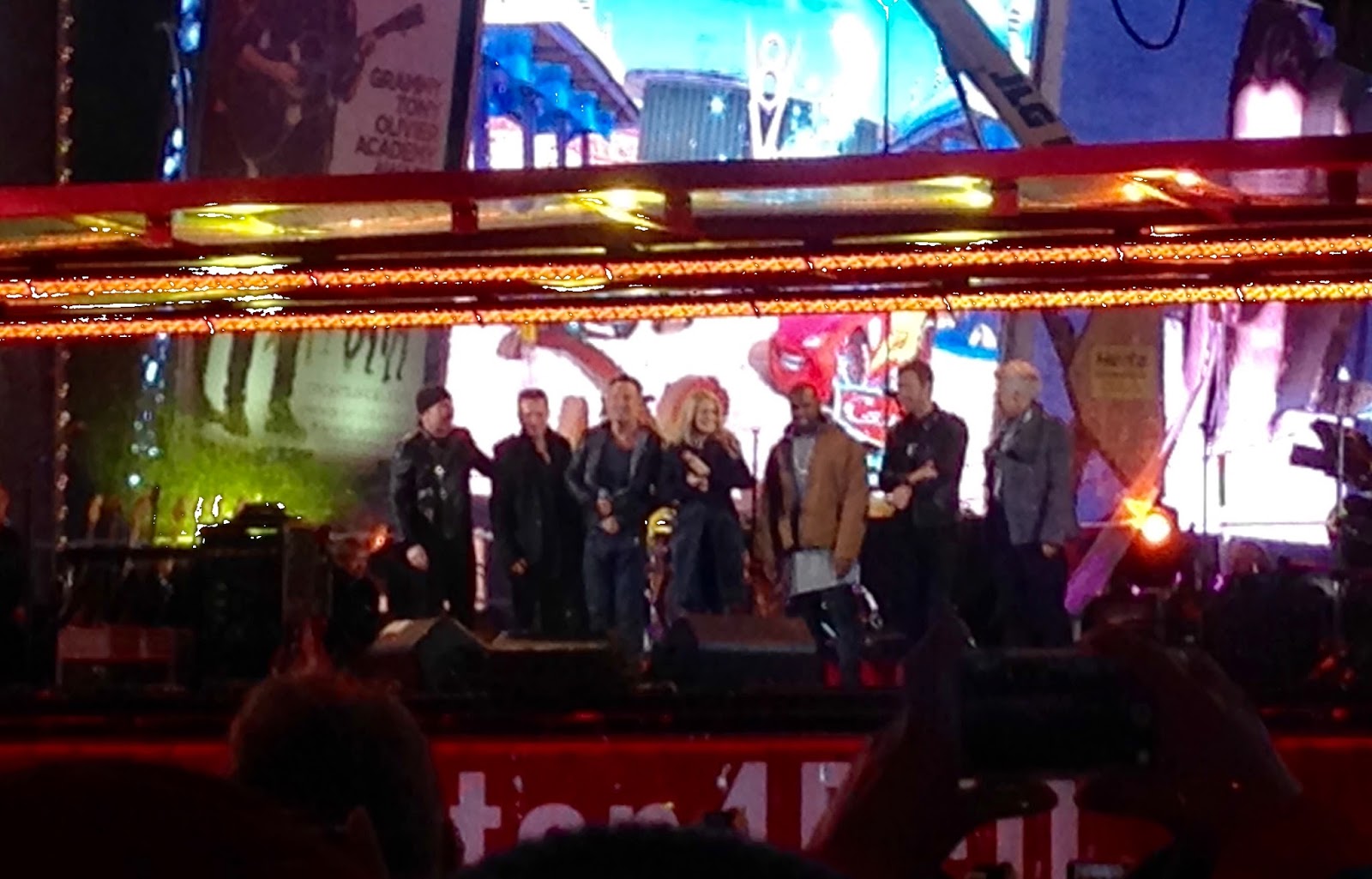 Posted by Claire at 9:08 PM No comments: